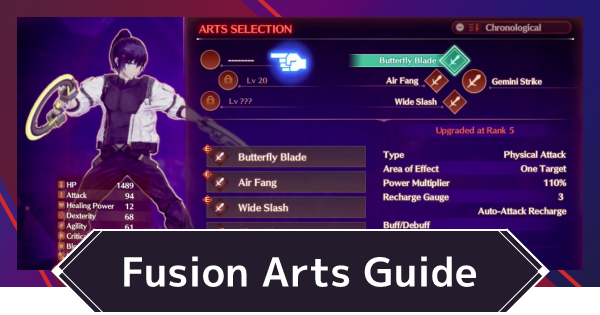 Xenoblade Chronicles 3 | Xenoblade 3
Fusion Arts Guide - How To Use

Fusion Arts is one of the useful functions in Xenoblade Chronicles 3. See Fusiong Arts info, advantages, controls, how to use, & more!

What Is Fusion Arts?

A Fusion Of Two Arts

Fusion Arts is a technique that combines Master Arts on the left side of the battle screen and Class Arts on the right. If you press the ZR button and press the corresponding Arts button (X, Y, B), you can utilize a Fusion Arts.

How To Learn Master Arts

As the class rank rises, you can master the Class Arts. The mastered Arts can be set on the sub-slot on the left side of the battle screen.

Master Arts can be used by its own

Master Arts can be activated on its owan by pressing the corresponding ↑, ←, ↓ button in addition to Fusion Arts. If the gauge of Class Arts is not full yet, you may use Master Arts without fusing.

Arts To be Fused Depends On Where It Were Set

You can't select any two Arts to fuse during the battle, since they are decided by the places you set in advance. Therefore, it is necessary to consider where to set the Arts.

Arts Of The Same Army Cannot Be Fused

Agnus and Keves can only use Fusion Arts between the ARTS of different troops. It is important to note that ARTS of the same army cannot be fused and you can't even set Master Arts.

The Effect Is Activated At The Same Time

Until you get the "The Art Of Flow" in Chapter 4, you can't connect Arts with another Arts. But you can use Canceling Attacks involving Fusion Arts before Chapter 4.

Canceling Attacks Can Be Used

Until you get the "The Art Of Flow" in Chapter 4, you can't connect Arts with another Arts. But before chapter 4, Canceling Attacks involving Fusion Arts are unlocked.

Canceling Attacks is a technique that can lead to the next attack, eliminating any gaps before and after the attack. The strength is to connect combo by making good use of this technique.

Using Fusion Arts makes it easier to raise the Interlink Levels for Ouroboros. Up to three stages can be upgraded, and the higher the Interlink level, the stronger the Ouroboros will be.

To use the Fusion Arts, you must be in the state where both Arts gauge are accumulated. Therefore, it is better to keep their recast time (the cooldown time before using Arts) as close as possible.

Set Arts With High Single Firepower In The Same Position

As a prerequisite, an attack when a Chain Attack has been utilized will be Fusion Arts, if the Master Arts is set. If you use a Fusion Arts, the TP will grow with a bonus, so use Fusion Arts as priority.

The quickest way to increase the damage during a Chain Attack is to set the Arts with high single firepower on the both. It can't go wrong if the Arts are at least set on the X button and the upper button.

Prioritize Arts According To Their Role

Like Class Arts, it is safe to set Master Arts that matches the role of the character. However, since there are only a limited number of Master Arts that can be used in the early stages of the game, it is acceptable as long as the combination is not incompatible, such as having an attacker with an Art that attracts Aggro.