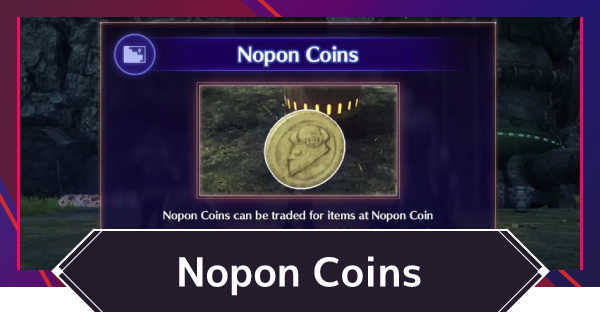 Best Use For Nopon Coins

Use Nopon Coin (Gold) To Exchange For Memory Locket

Nopon Coins Xchange Guide | How To Get To Sage's Domicile

Nopon Coin (Silver) Is OK To Use Regularly

Silver Nopon Coin can be obtained from skirmishes & rewards from quests, which is relatively easier to get than Gold Nopon Coin, so it is fine to use it when needed. See the acquisition methods & uses of Nopon Coin by accessing the navigation link below.

Spend Before It Exceeds More Than 99

The maximum number of Nopon Coins you can have is 99 each, and if you get more than that, they will be sold automatically. Keep an eye on the number of items you possess and use them beforehand before reaching your possession limit.

How To Farm Nopon Coins

How To Join Skirmishes Guide

There are some instances where you can get Nopon Coins from containers you find on the field. As you walk across the field, the container's location will be shown in the minimap so make your way to its location and open it!

Among the enemies on the field, there will be unique monsters with two names. Nopon Coins can be obtained as a reward by defeating these unique monsters. Since they are tough enemies even when at the same level as your character, if you can't win against them, simply train a bit more and then challenge them again.

You can get Nopon Coins from defeating Pippito in Aionios for the first time. It is recommended to inflict Bleed by using Battle Arts such as Hidden Thorn from Flash Fencer class to prevent it from escaping.

Drop Is Not Guaranteed On Succeeding Kills

After killing it for the first time, the drop of Nopon Coins is no longer guaranteed. The chance of getting Nopon Coins on succeeding kills is 2/40. It might take a lot of work & patience but this proves that collecting Nopon Coins can be infinite.

Can Get Gold From Nopon Coins

Nopon Coins can also be received as part of the rewards for completing quests. Players can also get other rewards, including Experience Points during quests, so it's best to clear these quests in between the Story. Though take note that not all quests give Nopon Coins as rewards.

You can get Silver Nopon Coins x30 & Gold Nopon Coins x10 in Vol. 1 of the Expansion Pass. Consider purchasing this if you enjoy playing Xenoblade Chronicles 3 to get the four additional contents.

By purchasing the Expansion Pass, you can also get Nopon Strap in replacement for Silver Nopon Coins x80.

Nopon coins can be exchanged for accessories at the special exchange shop at the "Sage’s Domicile" in Fornis Region. Both the gold and silver Nopon coins are required, so it is best to conserve the consumption of Nopon coins.

How To Get To Sage's Domicile

With this accessory, everyone acquires the ability to raise fallen allies which can be very helpful notably when equipped by a Defender. You can equip up to two Memory Locket so you besides the Defender, the Attacker can use it as well to secure the safety of the whole party.

Nopon Coin Gold - Uses & How To Get

Nopon Coin Silver How To Get & Where To Use

Other Uses For Nopon Coins

Nopon Coin (Silver) - How To Use

To complete Collectopaedia Card, you need to collect specific materials. However, you also have the option to complete them with the use of Nopon Silver Coins, it's still recommended to collect the materials, but if you want to get a reward quickly, you can use the coins instead.

Can Be Used To Cook Instead Of Using Ingredients

Nopon Coin (Gold) - How To Use

Can Be Used For Gem Crafting

Nopon Coin (Gold) can be used in place of materials when crafting Gems. If you create a gem, it can be equipped to everyone in your party. This is highly beneficial so use Nopon Coins (Gold) if you cannot collect materials to create them!