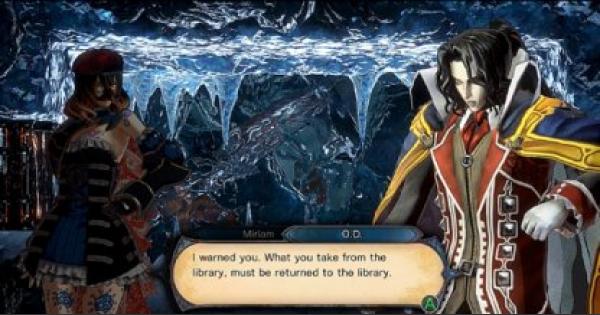 Check out this Bloodstained: Ritual of the Night (RotN) boss fight guide on how to beat OD (Orlok Dracula). Learn about OD's moves, bosses attacks, location, and more!

How To Find OD In Bloodstained

1. Comb The Entire Map And Get 99% Map Completion

This fight requires some tedious preparation, including combing through the entire map to reveal 99% of it.

2. Equip Tome of Conquest On Miriam

OD will tell you that the Tome of Conquest is specifically valuable. Now you need to bring this as far as possible, to the Glacial Tomb.

OD will be one of the hardest you will fight in this game, so make all the necessary preparations. Bring all the potions and food you can as some of his attacks can shred your HP quickly.

4. OD's Room Is Near Fast Travel In Glacial Tomb

OD's boss room is just near the fast travel point in Glacial Tomb. It will be blocked by a boss door to indicate he's there.

It is recommended for first-time players to beat Dominique and get the game's true ending before facing off with OD. His moves and attack damage are very powerful so it's best to get better Shards and gear.

The Rhava Velar is one of the best weapons in the game which will help you take down OD's HP fast.

Get & Equip The Accelerator Shard

The Accelerator shard will be very valuable since this allows you to move in quickly behind OD, and to quickly evade attacks. Just be careful when using this though since you can end up crashing into him or to his projectiles.

Get Behind Him For Damage Opportunity

Getting behind him will be the key to defeating OD. His attacks recover slowly, so jump over him and attack him from behind as much as you can.

Jump When He Turns Around

When he's being attacked from behind, he will slowly turn around and slash his sword. Jump as soon as he turns around to avoid getting hit.

Watch Out For His Backstep

Attacking him from behind can also cause him to backstep which can cause a lot of damage. one telltale sign is that he will briefly crouch down and do the backstep afterward.

He Can Stop Time

OD has the Standstill ability which basically stops time. This allows him to summon ice shards directed at you which will shoot out when time resumes running.

Equip Silver Knight To Shield You From Projectiles

Your familiars are not affected by the Standstill skill and can still attack during this phase. Equip Silver Knight as he can shield you from projectiles.

Heal Up When Time Is Stopped

His ice projectiles can deal a lot of damage and since you won't be able to move around, the likelihood of getting hit is high. Always keep your health up to avoid dying.

Watch Out For His Magic Abilities

He wields a variety of magic abilities that makes this fight very challenging. You'll have to focus on evading these attacks.

He throws a wave of ice on the floor. Jump to avoid damage.

He throws an upward fan of ice projectiles. Getting behind him is key to avoiding this attack.

He will throw 3 Flame Pillars in front of him. If caught between pillars, stay in between and jump to avoid succeeding attacks.

He throws three fireballs towards you, with each fireball having its own damage value. Getting hit by all 3 can mean instant death, so jump when he casts this attack.

Keep Moving And Avoid Getting Grabbed

He has a very hard to predict grab attack which drains almost your entire HP. Just keep jumping around. He usually jumps towards the left before this attack, and reappears at the left corner. It's best to simply jump over.

Grab Won't Connect If Charging At Him At Start

The grab won't connect when you charge at him while he's still winding up. You will take some damage but it may be necessary when you're caught near the edge of the area.

The Bloodsteal will be a useful shard ability to equip since you may run out of healing items quickly. Use this to keep your HP up and to restore a bit of health from time to time.

This ability allows you to stop time for as long as your MP can hold, freezing enemies in place. This is a useful ability to have when overwhelmed or to do burst damage on bosses.

Miriam Can Borrow & Equip All 21 of OD's Books

Arguably one of the best rewards in the game is the ability to equip all of OD's books. Instead of being able to borrow only 3 books, you'll get to borrow all of his books, giving you massive boosts in stats and various other perks!

Who Is OD (Orlok Dracule)?

OD or Orlok Dracule is the vampire librarian at the Livre Ex Machina library, who allows you to borrow a maximum of 3 books at a time at first. Upon unlocking the Tome of Conquest, he will caution you to ensure its return, and reaching the Glacial Tomb will prompt him to fight you.

OD wields abilities similar to Castlevania's Alucard, such as the flaming pillars, and can be seen transforming into a bat or a dog during the fight.

Step 1 is needed to unlock Tome of Conquest

during his "The World", you can rush to either edges of the room and crouch and you will not likely be hit

Only steps 2 and 3 are needed