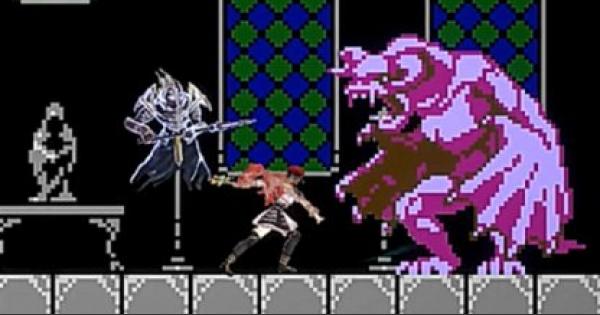 How To Find Eight Bit Overlord In Bloodstained

The secret room containing the shelf that unlocks the 8-Bit Nightmare is found at the upper most part of Hall of Termination where the save point and fast travel points are.

2. Break The Wall To Reveal Another Secret Room

The level is a straightforward room, with little navigation needed. Simply head straight to the right until the boss room in order to fight the Eight Bit Overlord.

The Rhava Velar is one of the best weapons in the game which will help you take down Eight Bit Overlord's HP fast.

Flies And Stomps On You

The Eight Bit Overlord will start its attacks by jumping and flying around at first. After a while, it will stomp and deal damage when caught underneath it.

Turns Orange When It's About To Stomp

The boss will turn orange when it's about to drop. It will give you enough time to evade so move out of the way.

Wave Of Flames Will Erupt After Stomp

When he lands, a wave of flames will erupt from the ground. Jump or use the Directional Shield to block it.

Summons a Wave of Flame Pillars

The Eight Bit Overlord will stand at the corner and summon a wave of flames that travel through the floor and ceiling. Using traditional evasion will not be effective since there's little space in between the upper and lower waves.

Use Directional Shield To Protect You From Waves

The Directional Shield will be effective in shielding yourself from the flames. This allows you to stay stationary while you prepare for a counter attack.

Similar to the waves, he will stand at the corner at shoot fireballs from its mouth directed towards the floor, wall and ceiling. You can evade or jump to avoid getting hit.

Flame columns will erupt where these fireballs land. Stand in between the columns to avoid getting hit or use the Directional Shield to protect yourself from the flames when unavoidable.

This ability allows you to summon the Eight Bit Overlord himself to roast your enemies in columns of 8-bit flames!

This crafting material allows you to fully upgrade a weapon crafted using the 8-bit coins. This is used together with the 32-Bit coin to craft the most powerful version of any 8-Bit weapon.

Who Is Eight Bit Overlord?

Reference to Dracula's 2nd Form in the Original Castlevania

Eight Bit Overlord is a reference to Dracula's 2nd form, characters from the original Castlevania game. It takes a form a large winged demon, and uses similar attacks such as the jump - stomp and fireballs.

Check Out All Easter Eggs Here!