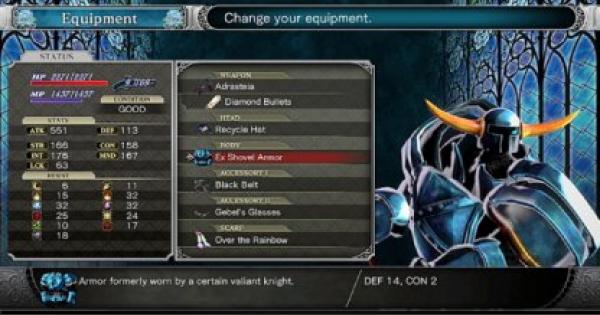 Read this Bloodstained: Ritual of the Night (RotN) guide on how to get the Shovel Knight costume, known in-game as Ex Shovel Knight armor. Includes how to unlock & get it fast, from which enemy this is obtained, & more!

How To Get Shovel Knight Armor

In order to induce drop of the Ex Shovel Armor, you'll need to boost up your luck stat by equipping items with high luck, and further boosting it with the Augment Luck stat.

Simply head on over to the Forbidden Underground Waterway and defeat a Shovel Armor enemy. It has a 3% chance to drop the EX Shovel Armor. The fastest way is from the Entrance fast travel point, but requires a door to be unlocked from the waterway.

What Is EX Shovel Armor?

The Ex Shovel Armor has very little DEF at 14 and 2 points of CON. Plus, given the limited moveset and mobility, your gameplay will be a lot more challenging.

Who Is Shovel Knight?

Shovel Armor is Based From Shovel Knight

The Shovel Armor enemy is based on the protagonist of another 2D side-scrolling game titled Shovel Knight from Yacht Club games. You play as the titular Shovel Knight, who is on a quest to save his lost beloved from an evil Enchantress.

The design used in Bloodstained: Ritual of the Night is a fan art drawn up by the game's character designer Yuji Natsume. In 2015, Inte Creates and Yacht Club games came to an agreement to include this re-imagining to the game!