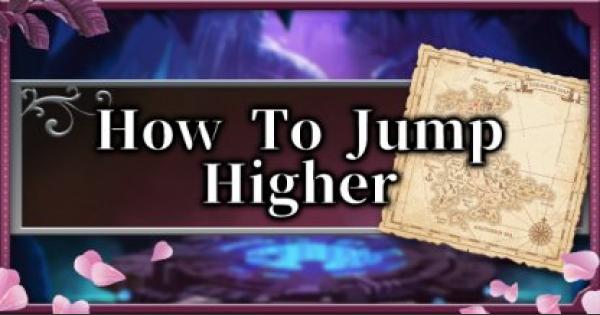 Bloodstained | Ritual of the Night
How To Get the Double Jump, High Jump, & Jump Kick

Read this Bloodstained: Ritual of the Night (RotN) guide on how to jump higher and reach high places, how to get the Double Jump & High Jump skill shards & more!

How To Get Double Jump & Jump Kick

The Double Jump skill shard is unlocked once you defeat the boss Andrealphus in Livre Ex Machina.

Check Out Where To Find & How To Beat Andrealphus Here!

As the name suggests, the Double Jump skill shard adds a second jump to your basic jump. Simply press the jump button again to perform a double jump. Small wings of light will emit from Miriam's back when performing a double jump.

The Double Jump skill also adds a Jump Kick ability which allows you to quickly fall back to the ground. After the double jump, simply hold the down button and press the jump button to do a jump kick.

Angle the directional button to the left or right to do a diagonal jump kick.

When enemies are hit by the jump kick, they will take a bit of damage, and Miriam will bounce upward.

You can further increase the damage dealt by Jump Kicks by equipping shoes. The better the shoes, the higher the damage!

Required To Unlock The Kickstopper Achievement

Once you have the Double Jump, you can unlock the Kickstopper Achievement by performing jump kicks 10 times without touching the ground.

Check Out All Achievements & Trophies Here!

How To Unlock High Jump Ability

The High Jump skill shard can only be unlocked through crafting. It requires the Bovine Plume material from the Haagenti, which can only be found in the Oriental Sorcery Lab. Craft this as soon as you can!

Once unlocked, the High Jump allows you to jump really high at no cost. Simply press the dodge button mid jump. Use this to reach really high places and even go beyond the view of the game's camera. Use this ability to look for secret areas and power ups!

You can spam the dodge button to stay midair. However Miriam can end up hitting the area's ceiling which briefly stops movement.

How To Jump Higher With Basic Jump

Hold Down Jump Button When Jumping

When you start the game, you will only have access to the basic jump ability. Pressing the jump key performs a basic jump. However, holding down the jump key makes you jump higher! The longer you press the jump button, the higher the jump becomes.

Certain Places May Require Other Shards To Reach

At first, certain areas may not be reachable with the basic jump. You may need other abilities such as Double Jump, Invert, or High Jump. An example of which is the area in Tower of the Twin Dragons that requires you to have the Double Jump to get to.