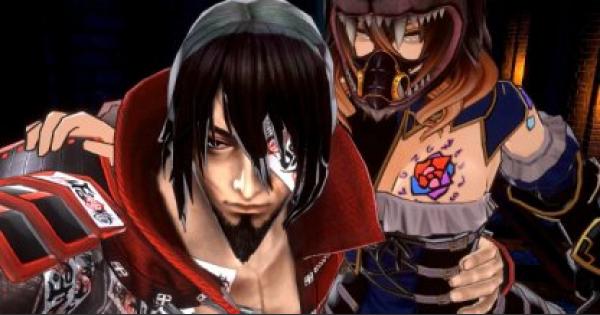 Bloodstained | Ritual of the Night
Towers: vs. Valac ~ vs. Glutton Train Walkthrough

Check out this Bloodstained: Ritual of the Night (RotN) guide and walkthrough from the Valac Boss Fight until the Glutton Train Boss Fight. This includes gameplay tips, hints, techniques, tricks and more!

vs. Valac ~ Bridge of Evil

2. Give Silver Bromide To Dominique In Arvantville

3. Talk To OD To Get Credentials

When you receive your photograph from Dominique, talk to OD in Livre Ex Machina. He'll give you credentials that you can use to board the train in the Bridge of Evil.

5. Take Lower Path To Get To Bridge Of Evil

After teleporting to the Gardenof Silence fast travel point, head east until you reach a room with two paths. Take the lower path to get to the Bridge of Evil.

Bridge of Evil ~ vs. Glutton Train

1~8. Mission To Reach Boss Is Timed

When you board the train, you'll notice a timer on the top of your screen. You have 5 minutes to make your way through the train & reach the Glutton Train boss fight.

3. Drop Down Through Train Car Openings

When you reach your first train car, you can drop down from openings in the ceiling. Check these spaces always for any items or chests.

5. Use Magic To Open Locked Doors

You'll find one locked door in this train and you can open it by aiming your magic towards it.

Hide Behind Zangetsu During Barrage Of Bullets

The Glutton Train will shoot a barrage of bullets onto you and Zangetsu. Listen to him and you'll hear him tell you to get behind him to protect yourself from this attack.

Boss Will Shoot When It Slams Its Gun On Ground

When you see the Glutton Train raise its gun arm and slam it on the ground, you'll know the bullet barrage is coming. It's best to move behind Zangetsu to avoid taking too much damage.

The boss will spit out fire that will quickly crawl through the ground towards you. Double Jump to avoid getting hit by this move.

The Glutton Train will extend its gun arm and sweep it backwards towards it. This can hit you pretty bad so avoid damage by double jumping when the arm draws near you.

When you defeat the Glutton Train, you'll unlock the Hammer Knuckle Shard. It's another offensive skill that will swing a giant fist towards where you aim.