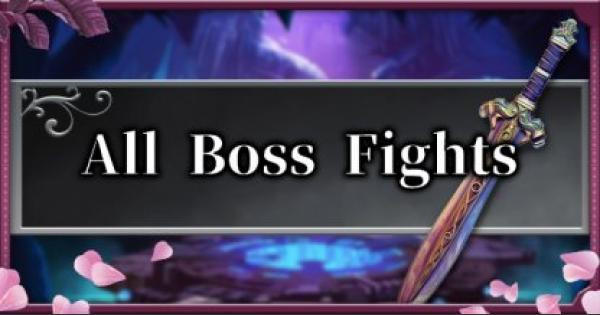 Check out Bloodstained: Ritual of the Night (RotN) guide for all boss fights & boss walkthrough in the game! Including end boss & final boss fights tips!

Check Out What To Do When Stuck At Boss?

The first boss fight in the game, Vepar fights you on the bow of the Galleon Minerva. It has long tentacles that swipe at you and summons Seama from the ocean. It also uses water to damage you.

Check Out How To Beat Vepar!

You'll encounter Zangetsu in the Entrance of the castle. The first time you fight him, he'll have 2 phases - normal and fire-based. He uses his katana and slashes at you.

Check Out How To Beat Zangetsu In Both Fights Here!

The 2nd time you face Zangetsu, he'll be in the Oriental Sorcery Lab. This time he has 4 phases - normal, fire-based, lightning-based, and ice-based. His attacks will vary depending on his phase, so come prepared.

In the Dian Cecht Cathedral, you'll face Craftwork. A giant hand made of stained glass, it does grab attacks and throws heavy objects at you. Defeating this boss will give you the Craftwork Shard.

Check Out How To Beat Craftwork!

Andrealphus uses its legs to kick and attack you. It also does jump attacks and sends rainbow missiles your way. Defeating Andrealphus grants you the ability to Double-Jump.

Check Out How To Beat Andrealphus!

Valac is a twin dragon boss that you'll encounter in the Tower area. It has shared HP and does simultaneous attacks. Prepare to dodge and move between the heads to avoid taking damage.

Check Out How To Beat Valac!

When you head to the Bridge of Evil, you'll fight the Glutton Train. This entire quest line is time & needs to be done under 5 minutes, so move fast!

Check Out How To Beat Glutton Train!

In the Underground Sorcery Lab, Bathin will use light rays to fight against you. Dodge through his attacks to take him down.

Check Out How To Beat Bathin!

In Livre Ex Machina, on the way to Hall of Termination, you'll encounter the Abyssal Guardian. It has flame breath attacks and swipes at you with its claws & tail.

Check Out How To Beat Abyssal Guardian!

An alluring vampire covered in blood, Bloodless uses the crimson blood to throw streams and projectiles towards you. Jumping is the key to your survival in this fight.

Check Out How To Beat Bloodless!

In the Hidden Desert, Alfred will fight you using projectiles that implement status effects. He also has elemental attacks that can be very deadly if you're not careful.

Check Out How To Beat Alfred!

The Doppelganger hits hard with katana attacks. It also summons a dragon & streams of fire from its palms. Bring lots of potions as this is one of the harder boss fights in Bloodstained.

Check Out How To Beat Doppelganger!

The boss fight in the Inferno Cave involves a monster that hangs from the ceiling. Orobas spews purple laser beams from different parts of its body and will reward you with the Invert Shard once it's defeated.

Check Out How To Beat Orobas!

The fight with Gebel is an important one and determines if you'll get the good or bad ending. Make sure you have the Zangetsuto and slash at the red moon to get the good ending!

Check Out How To Beat Gebel!

Valefar is one of the easier fights in the game. The Invert Shard and Aegis Plate are key items in winning against this boss.

Check Out How To Beat Valefar!

Gremory's attacks change depending on the phase of the moon in the stage. Equip Zangetsuto to deal heavy critical damage on this boss.

Check Out How To Beat Gremory!

The first of two continuous fights, Dominique has a huge range of attacks. Prepare many recovery items as she's one of the toughest bosses in the game.

Check Out How To Beat Dominique!

The final boss in Bloodstained, you fight Bael right after beating Dominique. Watch out for the different attacks coming from each head. The heads and the stage rotates so keep your wits about you in this fight.

Check Out How To Beat Bael!

The Revenant boss can be found in the Garden of Silence. You need the Warhorse's Key to open the locked door. Defeating this boss can grant you its Shard and materials to craft end-game gear.

Check Out How To Find & Beat Revenant!

The Master Carpenter's room can be found in the Oriental Sorcery Lab and you need the Carpenter's Key to open the door. It also drops a Shard and legendary crafting materials.

Check Out Where To Find & How To Beat Master Carpenter!

Millionaire's Bane is in Hall of Termination and its room needs the Millionaire's Key to be opened. Once defeated, it can give you its Shard and materials for legendary crafting.

Check Out Where To Find & How To Beat Millionaire's Bane!

Kunekune (Demon #44) can be found on the train at the Bridge of Evil. You need to get it to spawn before you can fight it!

Check Out How To Find & Beat Kunekune!

The mysterious librarian OD is an extra boss in Bloodstained and can be fought in the Glacial Tomb. To challenge him, your map completion should be at 99%

Check Out How To Find & Beat OD!

IGA is a DLC boss that you can only fight if you purchased the IGA's Back DLC. He can be found in the Hall of Termination and does a mix of magical & physical attacks.

Check Out How To Find & Beat IGA!

The Eight-Bit Overlord is a secret boss that you can fight in the 8-Bit area. It gives you a Shard and the 8-Bit Nightmare crafting material when you defeat it.

Check Out How To Find & Beat Eight-Bit Overlord!
ユーザー登録のご案内