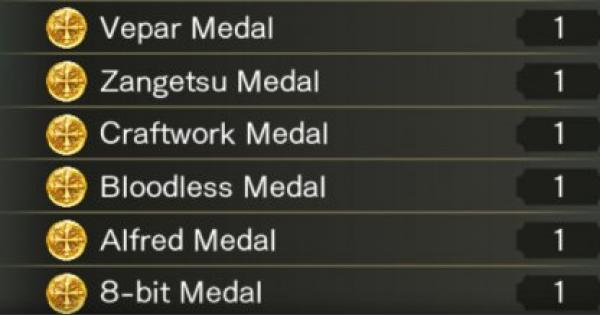 Bloodstained | Ritual of the Night
What Are Boss Medals?

Check out this Bloodstained: Ritual of the Night (RotN) guide on what are medals, how to get medals, medal rewards in boss fights, and more!

Check Out What To Do After Main Story!

Medals are items you receive in your inventory when you perfectly kill a boss without taking damage.

When you kill a boss perfectly, you'll receive both a visual and audio cue that tells you that you've done so. You'll see a big blue rose surround Miriam and an voice-over that tells you "Congratulations".

Have No Known Effects Or Rewards

Aside from showing up in your inventory, these Medals don't provide any other positive effect to your character stats. It doesn't have any other rewards but serves as player's bragging rights of defeating a boss without taking any damage.

How To Get Medals

The most basic way to get Medals is to defeat Bloodstained's bosses without getting hit or damaged once. Either dodge the bosses' attacks or take them down fast enough that they don't lay a hand on you.

After defeating the boss, you'll get an audio & visual cue within the game. You'll see a big blue rose pop up around Miriam and a voice congratulating you on your victory.

To check if you were successful in your attempt, you can open your inventory and look at your key items. The Medal you've just gotten will be in your inventory with the word "New!" to the left of it.

Tips On Getting Medals

Save & Restart To Get Perfect Kill

Always save before the boss fight so you can restart if you've been damaged by the boss you're facing. This way you have a refresh point that's not so far from the boss.

If you happen to be damaged during the fight, you can opt to keep the battle going instead of hitting restart. You can use this time to learn the boss's moves so you can better avoid their attacks in the next run.

When you clear the game one time, you'll get the option to start a New Game Plus. You can carry your stats over, including some of your most powerful gear & Shards. This makes it easier to instantly defeat some of the bosses in the game.

Check Out How To Unlock New Game Plus!