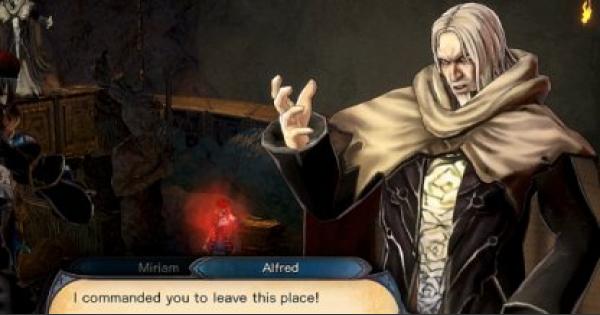 Check out this Bloodstained: Ritual of the Night (RotN) boss fight guide on how to beat Alfred. Learn about Alfred's moves, bosses attacks, location, and more!

How To Find Alfred In Bloodstained

The fight with Alfred is in the natural path of the main story. You'll encounter him at the end of the Hidden Desert, at the top of a spiraling tower.

Check Out How To Reach Alfred Here!

In this part of the game, you'll need to defeat Deeseama to get the Aquastream skill Shard. This opens up the path for you to reach the Hidden Desert where Alfred is located.

Most of Alfred's attacks are throwables, from Curse, Poison and elemental damage. It's important to keep moving around to avoid getting him.

When Alfred throws a small green bomb, you'll notice that it'll infect the ground with green sludge. If you step on this, you'll get poisoned so be mobile and dodge away.

Jump Over Him When He Casts Ice Vials

When you're close, he will throw an ice spell on the ground, and then run towards the opposite direction. Jump over him and he will be vulnerable as he runs.

Alfred will also toss fire spells onto the ground so you won't get near him. When he does this, you can jump over him to get to his other side, leaving him open for attack.

Dodge Or Jump To Avoid Petrification

Alfred also throws petrify vials onto the ground that can turn you into stone. Watch out for these and avoid them properly as being petrified can leave you incredibly vulnerable.

When Alfred summons a glowing pink ring, he'll throw a Curse projectile towards you. This homes on your location so don't stand still and move away to avoid getting Cursed.

Move Behind Him When Casting Ice Pillars

Alfred will occasionally summon ice pillars that will fall on top of you. Getting hit will really hurt you so jump behind Alfred while he's summoning to land some hits while he's stationary.

Drinks Potions To Power Up

When Alfred stops to drink a potion, he'll start glowing red. He'll be boosted when he does this, allowing him to cast more spells and dash around the tower faster.

When Alfred drinks another potion and you notice flames around him, this means it's not safe to get too close. The flames will damage your HP if you get too near Alfred.

Casts Slow Bubbles In The Field

When he casts a large blue ball at the center of the area, prepare to move around since certain areas will cause you to slow down your movement.

Use Ranged Weapons To Reach Alfred

During this phase, Alfred will be hard to reach. Switch to ranged weapons such as the Flying Edge & guns to still damage him even if you're far away.

When you defeat Alfred, the middle floor of the tower will be opened up to you. This area will have the Deep Sinker Shard, allowing you to reach deeper places in the Forbidden Underground Waterway to get to the Secret Sorcery Lab & Inferno Cave.

When you absorb the Deep Sinker Shard, you're able to sink down into water paths. This also allows you to open underwater chests that you come across.