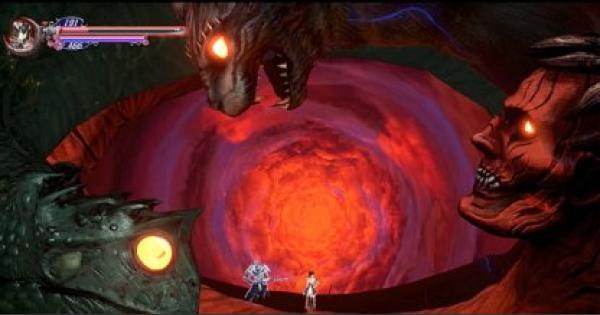 Bloodstained | Ritual of the Night
Tomb: vs. Dominique ~ vs. Bael Walkthrough

Check out this Bloodstained: Ritual of the Night (RotN) guide & walkthrough for after Dominique until the final boss Bael fight. Includes gameplay tips & tricks, hints, & more!

Glacial Tomb: vs. Dominique ~ vs. Bael

This fight immediately takes place after defeating Dominique, so make the necessary preparations before then. Bring your best weapons and armor before fighting Dominique to stand a chance against this boss.

Heal Up Before The Fight

Heal up as well before the fight begins. This is a relatively easier fight compared to Dominique but the boss can still hit hard if not careful.

Much like Valac, Bael's 3 heads share 1 HP Bar so there's no need to focus fire on one. You can damage any of the heads nearest you to bring down this boss.

This boss fight involves attacking a counter-clockwise rotating set of 3 heads. You will need to attack the heads to deal damage, while avoiding projectiles and their heads. Use a weapon that can attack from a small distance, like the Valkyrie Sword.

The Rotation Also Moves You Around

You'll have to adjust your movement accordingly in this fight since you are essentially on Bael and you move around with it. You can get stuck to the right side of the area if you don't move around so always be on the move during this fight.

As the heads rotate, you'll need to focus avoiding getting hit by the heads, and try to get as many hits in as possible.

Each Head Has A Unique Attack

At certain times during their rotation, each head will perform its unique attack.

The green frog head will shoot a green electric projectile that homes in on you. Move around to avoid getting hit.

The red demon head will vomit out flaming rocks down on you when it reaches the top of the area.

The cat head will summon a light ring which shoots out 2 laser projectiles, or at times, bouncing laser projectiles. Jump to bait it to attack that point and you should be safe when you land.

When it stops spinning, stay towards the lower right of the area, and deal as much damage as you can on the head to the lower right. HP is shared across all heads so just damage it as much as you can.

Summons Lava To Flood The Area

When it stops moving, it will flood the area with lava which deals a lot of damage when you're in it.

Make Use Of Purple Platforms To Avoid Lava

The purple platforms will be your key to avoiding the lava. Stay on top of to avoid the lava below.

Watch Out For The Beam Attack

After some time, Dominique will cast a spell and the cat head will charge a beam attack towards the purple platforms. Take the higher platform to avoid getting hit.

Use Invert To Avoid Damage

One great way to avoid getting hit during this phase is to invert. This will practically nullify the lava and charged beam attack since it only damages from the floor up to middle level.

The head that Dominique is attached to is the only one that damages the boss if you attack it, other than knocking them out of the fight for a small amount of time, attacking the other heads is pointless.