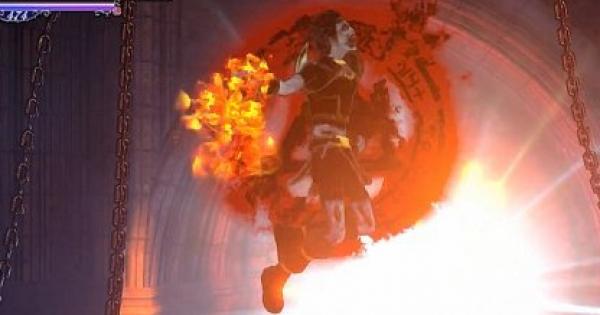 Read this Bloodstained: Ritual of the Night (RotN) boss fight guide on how to beat Revenant. Learn about Revenant's moves, bosses attacks, location, and more!

How To Find Revenant In Bloodstained

1. Key Is On Upper-Leftmost Room

If you are starting in the Warp Room of the Glacial Tomb, head out, and make your way to the leftmost area. Once you reach the room, a Gusion Cannon enemy will be guarding a green chest containing the Warhorse's Key.

The Warhorse's Room can be found in the bottom left room in the Garden of Silence. From the Warp Room, head to the leftmost area.

The Rhava Velar is a great weapon to use in this fight. It's high attack speed will allow you to melt away the Revenant's high HP pool!

Check Out The Best Weapons Here!

The Revenant will swing its whip at you to deal damage. It has an obvious telegraph to this attack so you have enough time to dodge it before he whips out his weapon to you!

When the Revenant jumps upwards, it is best to try and jump with it. Try your best to get over and behind it since it will attack with it's whip while it falls back to the ground. Getting behind it will get you out of the attack's range.

Evade It's Projectile Attacks By Jumping

The Revenant will also telegraph if it will throw a projectile at you. Be it the Ruinous Rood, or a knife; double jump to give the projectile enough time to pass below you and avoid getting damaged.

Avoid Jumping To Evade The Axe

This boss has another projectile attack that involves it throwing an Axe in an arc. It has a slightly different telegraph where it aims upwards. Use this to identify the axe attack and avoid it accordingly.

The Ruinous Rood allows you to perform one of the Revenant's attacks. Throw a spinning blade in front of you. After it reaches its max range, it will return to you like a boomerang.

Defeating the Revenant will allow you to complete one of Lindsay's Quests: "Avenge the Death of Richter!". Head back to Arvantville once you defeat the Revenant to claim the Bandit Blade as a reward.

During the fight, Revenant may drop the Imbrued Skull crafting item. This is a required material in order for you to craft the Tatenashi armor piece.

Who Is The Revenant?

Reference To Simon Belmont From Castlevania

The Revenant is a reference to Simon Belmont, one of the characters from Castlevania. It possesses a whip just like Simon and even uses similar sub weapons such as throwing axes, and the spinning blade that returns. Even it's movements mimic Simon's walk and jump.

You can easily avoid all attacks by inverting and staying behind the boss. Slide or Accelerator lets you stay on the correct side of the room. Use a "beam" spell to hit him from the ceiling.