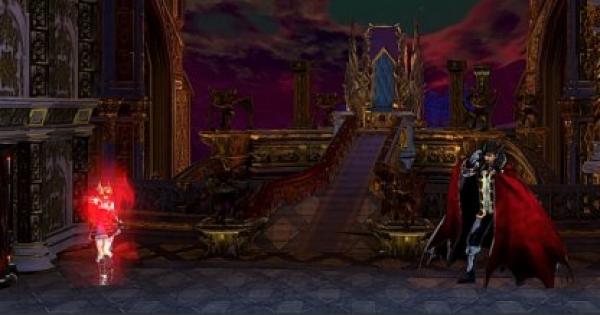 Check out this Bloodstained: Ritual of the Night (RotN) boss fight guide on how to beat IGA. Learn about the IGA's Back Pack DLC bosses, location, & more!

How To Find IGA In Bloodstained

Once you've purchased and downloaded the DLC, go to Arantville and talk to Lindsay to get the quest to defeat IGA.

To find Gebel, warp towards the Hall of Termination and go into Gebel's room. IGA will appear to fight you when you do.

IGA has a lot of moves that will tell you what he'll do next. This means you can predict his movement to a certain extend and know how to dodge or keep safe in this fight.

Miriam Can Only Damage IGA's Face

You should mainly target IGA's face as this is the only part that you can damage. Hitting his cloak or any other part of his body will not deplete his HP so jump and attack his face at all times.

When IGA pulls out his wine glass, there are two moves he can do. One that summons fire pillars from the ground, the other summons smaller fire spouts around the room's walls.

When IGA summons the fire pillars from the ground, either keep super close to him or find a gap between the pillars to avoid taking damage.

When IGA summons smaller fire pillars that encircle the room's walls, you need to follow its movement then jump to prevent yourself from getting hit.

IGA will sometimes summon a giant block of ice that will float in the middle of the room. This is a telegraphed attack, meaning you can predict his next move.

After the ice block is summoned, IGA will teleport diagonally across from you. He'll hit the ice block and break it into smaller projectiles. Immediately move across the room after he summons the ice block so you can damage him as he lands.

When IGA disappears and appears in the air, he'll shoot out several fireballs that will head downwards diagonally. Immediately move towards & under him to prevent taking damage.

Fireballs Stay For A Few Seconds Before Disappearing

When IGA throws fireballs and they land on the ground, they'll stay in the stage for a couple of seconds before disappearing. If you end up hitting them, you will get damaged so avoid them at all costs.

When IGA summons an orange glyph in front of him, he'll shoot a barrage of fireballs horizontally. Jump above and into the air to keep yourself safe.

When you turn in your Bounty to Lisa after defeating IGA, you'll receive the Sword Whip. It attacks the same way as a sword but if you hold the attack button, the attack reaches farther.

This skill Shard makes Miriam pull out a wine glass and toss it towards the ground, creating small pillars of fire that move across the ground. This is effective in hitting enemies that are not airborne.

The Creator Of Bloodstained: Ritual of the Night

IGA is the game version of Bloodstained's maker, Koji Igarashi. He is most known for creating Castlevania: Symphony of the Night and popularizing the game's genre with the name "Igavania".

You'll be able to encounter and fight IGA when you purchase the IGA's Back Pack DLC. Originally a Kickstarter-only bonus, it's been made available to all players for a set price.

Does update 1.15 add any additional items to collect?
My shards are sitting at 99% and there are 2 additional scarf items and 1 addiitional headgear item to find now (they were previously both 100% prior to the update being installed) but i've crafted everything and my demon completion is at 100%