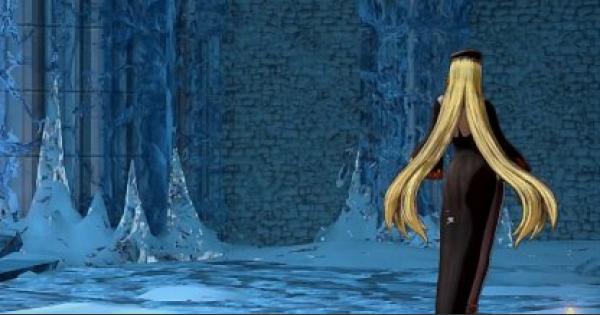 Bloodstained | Ritual of the Night
Tomb: vs. Gremory ~ vs. Dominique Walkthrough

Check out this Bloodstained: Ritual of the Night (RotN) guide & walkthrough for after the Gremory Fight until the final boss Dominique Fight. Includes gameplay tips & tricks, hints!

Glacial Tomb: vs. Gremory ~ vs. Dominique

When you defeat Gremory, head back up and proceed left until you reach a vertical room. Drop down and exit towards the left to encounter Dominique.

This fight with Dominique will be tough and will automatically lead to the final boss fight. Be prepared and make sure to bring a full stock of potions & recovery items such as food to keep your health up during the two intense boss fights.

Dominique has one of the most erratic movements in Bloodstained. This boss fight really relies on your skill and how fast you can react to avoid her unpredictable attacks.

Does Moves From Previous Bosses

Dominique Can Be Baited To Do Certain Moves

When too close to Dominique, she can grab you for instant damage. Once she grabs you, you can't dodge away so be sure to keep your distance from her.

Jump Over & Behind When She Summons Ghosts

When Dominique summons a bunch of ghosts, you can jump over them and move behind her to hit her from the back.

Dominique will use a whip imbued with the light element. She whips her weapon in front of her so dodge away or keep your distance to keep safe.

Summons Light Streams That Home On You

Dominique will also summon several light streams that will home on your location, one after the other. Keep mobile and dodge back so the streams won't hit you.

Powers Up When Eyes Glow

When Dominique powers up, she'll summon a large light beam that'll shoot straight forward. Crouch to avoid getting hit by this large beam.

Dominique will summon a dragon when she opens up a portal. Avoid getting damaged by jumping above the dragon when it swipes and sends flames forward through the ground.

Dominique will also shoot out fireballs above her head. These fireballs will explode when they hit you and if they don't, will stay for a period of time. Hitting them when they're stationary will damage you.

Summons Stalactites That Fall From Ceiling

Like Alfred's move, Dominique can also summon a row of stalactites that will fall from the ceiling. Keep still in the gaps to avoid taking damage or jump over Dominique & hit her from behind.