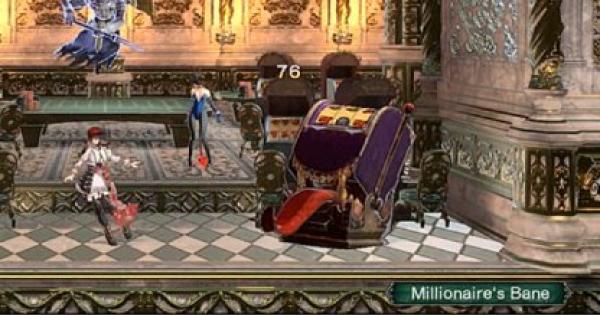 How To Find Millionaire's Bane In Bloodstained

1. Get The Millionaire's Key From Den of Behemoths

You can find the Millionaire's Key in an oversized green chest in the Den of Behemoths. It's on a ledge in the middle of the wide open area in the den.

2. Millionaire's Room Is In Hall Of Termination

From the fast travel point in Hall of Termination, head down and then right to the next small vertical room. You'll see the locked door to your right.

Using High DPS weapons will be ideal for this fight since he moves around quite a lot. Use the best weapons that you have to take it down quickly!

It Has A Jump & Stomp Attack

It will jump up in the air and land. It has a brief window to evade so jump up as soon as it lands.

Boss Charges To Where It's Facing

When it stomps down, it will immediately charge towards anything in front of it. Jump up towards the middle to prepare for coins that will drop from the ceiling.

Drops Coins From Ceiling When It Lands

Coins will drop from the ceiling when it lands, which will deal damage to Miriam when they hit. Stay at the middle or at the edges of the area to avoid getting hit.

Slot Machine Determines Its Next Attack

When you deal enough damage to it, it will spin its slot machine to determine its next attack, and guards against any incoming attack. This is completely random, and the results and actions change depending on the combination.

3 Coins Will Make Him Spin Again

It will spin its slot machine again if it results to a combination of 3 coins.

Bouncing explosives will drop from the ceiling, which will explode after a brief period. These are invulnerable to standard attacks so watch out.

The Lili that stands in the background will be summoned to fight you. The Lili isn't that particularly strong so just take it out as soon as it gets out of the portal.

3 Bells Summons Cannons On The Ceiling

If you get a combination of 3 bells, it will summon 2 cannons on the ceiling which will shoot bouncing coins. Avoid getting hit by the ricochet!

If the slot machine results to a line of 3 bars, gold will drop from the ceiling which you can pick up!

When you get 3 Sevens, the room will be raining gold, while killing the Millionaire's Bane instantly!

No Combination Results To A Licking Attack

If no particular pattern appears, it will just do a small jump and do a licking attack towards its front.

This shard gives you the ability to summon the Millionaire's Bane, and uses the same slot machine mechanic to determine its attack!

The crafting material Imbrued Fang is obtained from this boss, which is a key ingredient to craft the Rhava Velar, one of the best weapons in the game!

If you flip the room upside down, the boss becomes much easier.