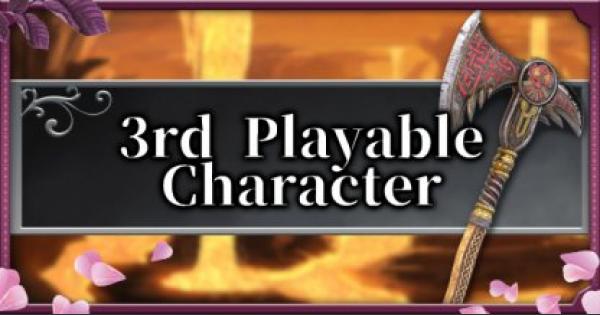 Check out this Bloodstained: Ritual of the Night (RotN) guide to find out who, besides Miriam, is the new 3rd player character in the game, either Dominique or Gebel

Check Out All Playable & NPC Characters!

Who Is New 3rd Playable Character In Bloodstained?

There have been rumors circulating that Dominique may be the 3rd playable character in Bloodstained: Ritual of the Night. This information has not been confirmed and will be verified once actual details are out.

Play Style May Be Similar To Castlevania

Dominique wields a light-based whip, reminiscent of the protagonists in Castlevania games. It's possible that her gameplay & play style will be similar to those characters from Igarashi's old game.

Though no details have been shared, it can be possible that the story may be switched between Dominique and Miriam - with Dominique being on the good side and will battle Miriam who may be corrupted by the crystal's power.

Aside from Dominique, Bloodstained fans are speculating if the 3rd playable character is Gebel, Miriam's childhood friend. This could put a new light on Gebel's story and show his side of the narrative.

Since Gebel is also a Shardbinder, he has similar capabilities as Miriam. This may make his gameplay and play style similar to how players went through the story as Miriam.

Previous Protagonist Of Curse Of The Moon

It can be possible that Gebel will be the 3rd playable character as he already had a role as a main character of the prequel, Curse of the Moon.

One of the upcoming DLCs for Bloodstained includes a Boss Revenge game mode. This will allow players to play as the bosses in the game and their goal is to foil the plans of the heroes.