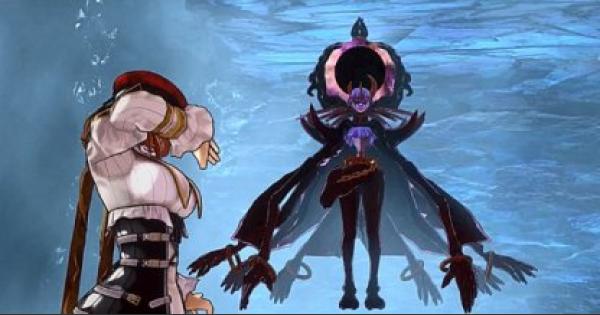 Bloodstained | Ritual of the Night
Den of Behemoths: vs. Valefar ~ vs. Gremory Walkthrough

Check out this Bloodstained: Ritual of the Night (RotN) guide & walkthrough for after Valefar until the Gremory Fight. Includes gameplay tips and tricks, hints, and more!

Den of Behemoths: vs. Valefar ~ vs. Gremory

Den of Behemoths: vs. Valefar ~ vs. Gremory Walkthrough Chart

To get to the Glacial Tomb where the next boss fight is, follow the arrows above from where you fought Valefar.

You'll have to deal with end-game mobs from here on so it's best to put on your best gear. At this point, the Traverser's Ring accessory will be handy as it enhances your attack power as you reveal more of the entire map.

Mobs Are Slow So You Can Run Past Them

Fortunately though, most of the enemies and monsters here are slow and can be easy to avoid by running past them. One enemy to be cautious of is the Gusion Cannon, as it shoots out multiple Guisions which can quickly overwhelm you.

3. Stock Up On Potions

Since this is one of the last few bosses you'll fight, you will need to stock up on Potions and Food to help you recover. Either farm for money or for potion crafting materials outside Arantville to craft High Potions.

The Zangetsuto will be the key to beating Gremory as all attacks with it will deal critical damage. Make sure to also use its Crescent Stroke technique (Back, Down, Forward, Up + Attack) to deal more damage.

Attacks Are Determined By Phases of The Moon

She will send a volley of curse projectiles towards you to inflict curse, which halves you HP and MP for a while. These can be avoided with a well timed dodge.

Creates A Dimensional Rift to Attack You From the Floor

Slide Under Her To Avoid Damage When Pursued By Arms

Her arms are quite fast so you'll have to maneuver well. Slide under her to avoid the arms and her hit box.

Maintain a Bit of Range When Attacking Gremory

During this attack, maintain a bit of range when attacking Gremory. When it's done finishing its attack, it will essentially extend its arms again and damage you if close enough.

Once she reaches the crescent phase, she will summon crescent moon projectiles to attack you. You can attack the white projectiles to deflect them, however, the red ones cannot be deflected.

Use Silver Knight To Protect You From Projectiles

A decently leveled Silver Knight familiar can protect you from her red projectiles. This will allow you to focus on attacking instead of evading.

Once It Reaches Half Moon, Summons Giant Scissors

Once in Half Moon phase, she will summon a large scissors to attack. It's best to stay at ground level to bait her to attack your feet, and then jump just right after she disappears from the screen.

Move Around Her To Avoid Rotating Beam

Once in full moon phase, she will start attacking you with a rotating beam. You'll have to circle around her to avoid getting hit, using a mix of invert and slides. This is a powerful attack and should be avoided at all costs.

She Is Momentarily Vulnerable When Reaching Full Moon

Right after turning full moon, she will be momentarily vulnerable before disappearing. She will reappear again to initiate the beam attack.

Remains in Full Moon And Uses All Attacks In Sequence

After the first charged beam attack, she will cycle through her moves in sequence while remaining in full moon phase.