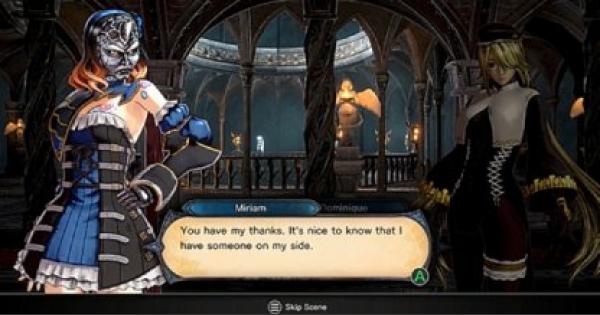 Bloodstained | Ritual of the Night
Entrance: vs. Zangetsu ~ vs. Craftwork Walkthrough

Check out this Bloodstained: Ritual of the Night (RotN) guide and walkthrough following the Zangetsu boss fight until the Craftwork boss fight . This includes gameplay tips, hints, techniques, tricks & more!

7. Paintings Can Slam Onto You

Watch out for the paintings as they can fly and slam themselves onto you. Destroy them if you can when they're stationary.

Watch out for its attacks as it can inflict curse status which halves you max HP & MP.

12. Customize Your Appearance At The Hair Salon

You can change the appearance of Miriam at the Hair Salon, including hair style, color, and more!

14. Head Back to Entrance Fast Travel Point to Save

The fast travel point at the Entrance location has a nearby save point. Go there to save your progress.

Make sure to defeat the sword demon Bloodbringer. Defeating it will unlock the Bloodbringer Familiar Shard, which summons Bloodbringer to fight for you.

Summon Bloodbringer To Fight For You

Summoning Bloodbringer will help you take down Craftwork faster as he moves around a lot.

Watch Out For Its Jump Attack

It jumps up and slowly falls back down. You can evade this easily by running against its path.

A steeper and higher jump will lead to a quick slam stack that's harder to evade. When it jumps, always be prepared to evade.

Hit It While It Recovers

It will momentarily stop and rotate to realign itself. Use this opportunity to hit it on its back side. But be sure to keep a bit of distance to avoid getting hit.

Can Catch You If You Jump Towards It

If you jump at the exact same time as Craftwork during this attack, it can catch you and drag you to the ground, dealing massive damage until it hits a wall.

Craftwork Is Knocked Back When It Hits Wall

It will slam itself to the wall and be knocked back momentarily, allowing you to deal damage.

It Throws Environmental Objects At You

It grabs the podium to the right of the room and slowly climb up. Once it reaches the ceiling, it will throw the podium to you to deal massive damage.

Watch Out For Its Charging Attack

It will raise its fingers while on the ground and charge on you for massive damage. Be careful of jumping, as it can still damage you mid air. Just run back and backstep as far as you can.

Use Platforms To Go Around Him

There is a platform at the middle right area of this room you can use to evade this attack. This also allows you to go around him.