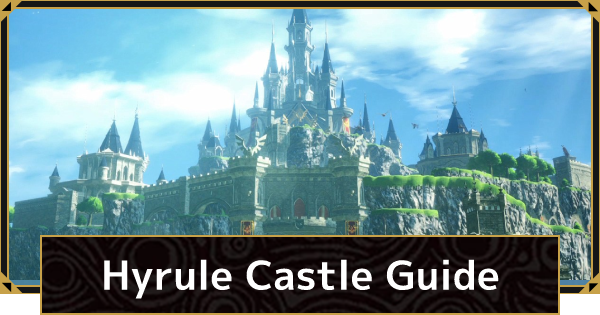 The Guide for Hyrule Castle in Zelda Breath of the Wild (BotW). Learn how to get to Hyrule Castle, the locations of Korok Seeds, Shrines, Armor Set, Captured Memory, and Bosses.

How To Get To and Enter Hyrule Castle

Entering from Docks, you can reach the shrine immediately. The shrine appears when you light a large Torch and allows you to easily sneak into Hyrule Castle even after escaping via warp.

Head to the west side of Hyrule Castle from Katah Chuki Shrine and Noya Neha Shrine. It is easy to reach by following the remnants of the fort walls.

There are few enemies surrounding the perimeter, so the land is somewhat safer. If you want to escape from Guardians, you can use Cryonis or other means to cross the surface of the water.

How To Reach Ganon (Sanctum)

Ganon awaits his resurrection at the Sanctum in the center of Hyrule Castle. Any way to get there is the right way, but here are some recommended routes to get there while avoiding enemies as much as possible.

Recommended Route From The Main Gate

▲The view of map is from the side, near Docks.

How To Get To The 2nd Floor of Sanctum

How To Get To Captured Memory Location

How To Reach Stalnox (Lockup)

How To Reach Stone Talus

Only items that can be restored or reacquired by the Red Moon are listed.
The Rusty series is excluded.

Hyrule Castle Guides For Each Area

Video Guide From The Shrine To The Guards' Chamber

There are two hidden rooms, one is King Rhoam's study. There are about 300 Rupees, equipments, and a diary about Zelda when King Rhoam was in good health.

Recipes Favored By Zelda And The Minister

Cooking recipes are left in the Library, leading to the answer to the Side Quest "A Royal Recipe". It is a chance to learn not only the recipes but also the preferences of Zelda and the minister.

The route connecting the Library and Dining Hall is the Armory. Although the name is not shown, it consists of a lower floor and an upper floor and a large area. There are many hidden rooms covered with fragile walls.

The large hall served as the dining room of Hyrule Castle. It is a great place to procure food, as there are a large amount of food scattered about and a cooking pot on the floor.

The Observation Room is a place where can look at the main gate directly and offers a panoramic view of the advance of foreign enemies. At the first visit, Malice of Ganon is nesting and cannot be entered from the balcony on the side of the main gate.

The place used to be the training camp for soldiers. It consists of three levels: upper, middle and lower, but the stairs to the upper floor have collapsed.

Zelda has her own room and laboratory for ancient weapons. Zelda's diary and research history are still available and provide an insight into her thoughts and hardships at that time. It is also a deeply moving place where a single flower of Zelda's favorite, the Silent Princess, blooms, as Link remembers.

The lockup is located on the lowest level of the castle and adjacent to it is a room where the final test of training is conducted.

▲It's Stalnox when Link visits, but considering that Hinox was here more than 100 years ago, the final test was pretty hard...?

Waterway Inside The Castle

There is a waterway in the castle adjacent to the Lockup. The Water Pump Room is at the end of the ladder, and if you activate the switch, an updraft will occur.

▲Link can use the updraft to travel to upper rooms, but it may have been normally used as a vent. Incidentally, Zelda's room is directly above this waterway.