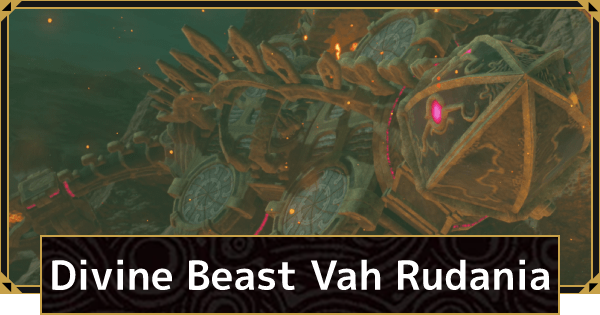 Divine Beast Vah Rudania is a quest in Zelda Breath of the Wild (BotW). Learn the full walkthrough and the locations of terminals and treasure chests in this guide.

How to Defeat
Fireblight GanonList of
Main Quests

Get a Flamebreaker Armor at the Southern Mine

You can accept a Side Quest of catching Fireproof Lizards at the Southern Mine on the way to Goron City. As the first-time reward, you will receive the Flamebreaker Armor, which is an armor with the effect of Flame Guard. You can buy it in Goron City, but getting them here will save your Rupees.

Prepare All the Fireproof Equipment in Goron City

Buy some Fireproof Equipment when you arrive in Goron City. You can skip the Armor if you've already obtained it in the Side Quest, but you should buy the Helm and Boots. Since the Helm is expensive at 2,000 Rupees, give priority to the Boots, which is only 700 Rupees.

Flame Guard Level 2 or higher is required to proceed

The Abandoned North Mine, where you will be heading in the Main Quest, and the area around Death Mountain require at least Level 2 of Flame Guard. The best way is to wear two pieces of Fireproof Equipment, so be positive in buying equipment.

At the Abandoned North Mine, use the updrafts to advance to the destination. The Lizalfos will attack you with the Fire Arrows, so proceed while defeating them as possible. Put the Remote Bombs in the cannons, and the cannons will create updrafts when it explodes, use this to move on.

Destroy the Rubble Where Yunobo Is With the Cannons

When you get close to the destination, use the cannon in front of you to destroy the rubble where Yunbo is trapped in.

How To Deal With the Sentries When Driving Vah Rudania Away

After crossing the Bridge of Eldin, proceed and avoid the Sentries while signaling Yumbo to move on. Except for the first Sentry, the rest of them can be easily destroyed by the things around you, it's best to destroy them and then proceed safely.

Map Inside Vah Rudania and Locations of Terminals

Once inside Vah Rudaniam, the area becomes dark and you cannot see anything. Defeat the two Malice in front of you, and get the Torch from the treasure chest. There are lanterns in front of each door. Light a blue flame on the lantern to open the door and proceed.

The first door is on the right side, and the second door appears after you defeat the Malice on the left side.

Getting the Map Clears the Darkness

After getting the map at the far end through two doors, the ceiling opens and the darkness disapears. You are not able to explore this area properly until you get the map, so the first priority is to get the map.

Turn Vah Rudania Vertical or Horizontal to Solve the Gimmicks

Inside Vah Rudania, tilt Vah Rudania in two orientions to solve the gimmick. For convenience, we refer to the normal four-legged state as [horizontal] and the two-legged standing state as [vertical].

To open the large steel door, you need to burn the door stop. If you don't have a Fire Arrow, you can place the arrow close to a nearby Blue Flame Lantern, and leave it burn. Once it get burned, open the door with the Magnesis and you will find the terminal inside.

Next to the entrance with two Blue Flame lanterns, there is a door with a small hole in it. Shoot an arrow with a Blue Flame through this hole to light the lantern on the other side.

Burn the Leaves On the Ceiling of the Room Inside

There are leaves on the ceiling of the room you enter, burn them again with your arrow. A steel box falls from the ceiling. Catch it with the Magnesis to stop the flames erupting.

Turn Vah Rudania in vertical orientation to allow Link to pass through. Once inside, turn it back to horizontal orientation to activate the terminal. After activating, the flame will stop erupting and you can go back.

Turn To Vertical Near the Right Forefoot

Go to the inside of the right forefoot and move Vah Rudaniam in vertical orientation, the terminal will be right below you. Since it might slip down or be missing during turning vertically, it'd be safer if you wait at the protruding part shown as the image.

▲The image when turning in vertical orientation. It would be easier to jump down from here using a Paraglider.

Light the Torch and Cross the Beam

First, move to the position shown in the image with the Blue Flame on the Torch. Turn Vah Rudania vertical to allow you climb to the root of the beam and cross over it.

Check Where the Lantern Is Before Going Down

After crossing the beam and going outside, move the camera down and go to where the lantern is. Then, light the lantern by turning Vah Rudania horizontal.

Adjust the direction of Vah Rudania to let the ball rolls downward.

Lift the Steel Box to Let the Ball In

Once the ball falls to the bottom of the beam, lift the steel box up with the Magnesis. When the ball falls into the hole, the door to the terminal will open.

Head to the Side of the Dorsal Fin

First, aim for the side of the dorsal fin. Defeat the Malice that you can see from the location of the blue flame lantern outside, and then turn Vah Rudania vertical to move to the side.

After moving to the side, go to a position where you will not fall when returning to the horizontal orientation.

Defeat the Malice to Activate the Terminal

There is a Malice attaching to the terminal, defeat it safely with the bow and activate the terminal.

1：The Tail of Vah Rudania

Head to the tail from the entrance, you will find a treasure chest at the tip.

2, 3：Destroy the Malice at the Entrance

Destroy the two Malice right after the entrance, two treasure chests will appear. Keep the Torch with you as it will be used to solve the gimmick.

After opening the first door with a blue flame, destroy the Malice attached to the wall, a treasure chest will appear at the same time as the second door and the lantern.

5, 6：Destroy the Malice at the Base of the Right Forefoot

Destory the Malice inside Vah Rudania, near the base of right forefoot, two treasure chests will appear.

7：Destroy the Malice on the Ceiling

When Vah Rudania is in horizontal orientation, you can find a Malice on the ceiling inside the torso. A treasure chest will fall down when it is destroyed.

8：Burn the Leaves On the Terminal 1

Burn the leaves in the room of the Terminal 1, a treasure chest will fall from the ceiling.

9：On the Beam Inside the Torso

First, face the root of the beam and turn Vah Rudania vertical in this state.

Once Vah Rudania is in vertical orientation, stand near the root of the beam (around the position in the image above) and return it to horizontal again.

Reach the top of the beam, go straight up to get the treasure chest.

10：The Side of the Dorsal Fin

Turn Vah Rudania vertical at the blue flame lantern outside. Walk along the dorsal fin to get the treasure chest. Take down the Malice in advance.

The treasure chest here is a little difficult to find, please watch the video showing how to get it.

First, go to the head part in the horizontal orientation. It'd be better to take the blue flame lantern as a landmark.

In the vertical state, you will see a foothold with a Malice in the abdominal part near the left forefoot.

There is a foothold with a small hole further in from the place where the Malice is, and if you get into the small hole with the Paraglider, you will reach a small room with a treasure chest. There is a switch in the small room, use the door that opens with the switch to go back inside.

The boss is Fireblight Ganon. You need to prepare the heat resistance and avoid wooden weapons. You can use the Remote Bombs to stop him from moving, and deal damage easily.

See How To Defeat Fireblight Ganon