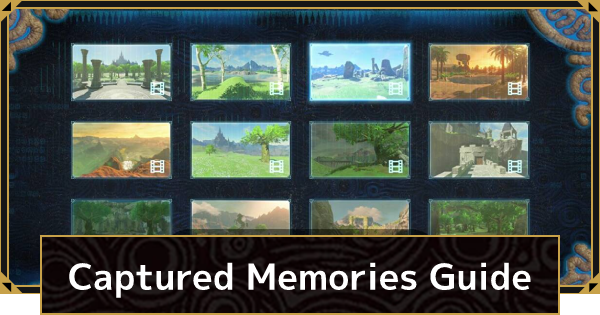 The best way to get there is from the Katah Chuki Shrine southwest of Hyrule Castle or from the Central Tower. Since there's a Guardian roaming around, take a shield and elixir just in case.

The camera location is on the west side of Lake Kolomo, north of the Oman Au Shrine on Great Plateau. If you fly with a Paraglider, you'll get there in no time.

Located in Kara Kara Bazaar on the way to Gerudo Town.

Head east from Monya Toma Shrine near Serenne Stable. A slightly curved hill is a landmark.

It is located on the opposite bank along the river to the south from Bosh Kala Shrine which is east of Great Plateau Tower. Opposite side of the Hylia River across from the Scout's Hill.

On the bridge in front of Princess Zelda's Study in Hyrule Castle. It is easy to head there from Saas Ko'sah Shrine in Docks and should be activated first.

If you haven't activated the Tutsuwa Nima Shrine in The Spring of Power, head west from the Katosa Aug Shrine near the East Akkala Stable.

Paragliding west from Satori Mountain where Mogg Latan Shrine is located. Alternatively, take the Horse from the Outskirt Stable near the Rota Ooh Shrine and follow the road.

Head from the Dow Na'eh Shrine in the waterfall on the Lanayru Sando Central Square. There are many enemies along the way, but you can avoid some of the fighting by climbing waterfalls and flying with the Paraglider.

Head from Kaya Wan Shrine, located near Wetland Stable. Across Hylia, in the woods northeast of Bottomless Swamp.

The 13th Camera location is unlocked after checking the 12 Camera location and talking to Impa in Kakariko Village. Go straight east from Dueling Peaks Stable near Ha Dahamar Shrine.

Get Hints From Pikango In Various Places

Camera does not display the location even if you set the destination of the Main Quest, and there is no way to find it yourself. However, you can get a rough hint of the location by talking to Pikango in various places such as Stables.

Requires Find The Fairy Fountain To Be Completed

In order to be able to receive hints from Pikango, you must have completed the Main Quest called "Find the Fairy Fountain". This is the Main Quest that can be accomplished as soon as the Captured Memories mission is unlocked, so let's complete it.

The Order In Which Cameras Are Collected Does Not Matter

▲Cameras that have been verified are marked with a film-like mark.

There are 13 types of Camera to look for. Twelve of them are stored in Camera from the beginning and can be started from any of them. The order in which you find them will not affect the story in the future, so it doesn't matter which one you go to find them.

A Ring Of Light Will Appear As You Approach The Location

When you approach the place where Link's memory is located, a circle of light appears.

Collect Any One Of Them And Get A Champion's Tunic

Finding one of these will update the quest and allow you to report it to Impa. Talk to Impa in Kakariko Village to receive the Champion's Tunic!

You Get The 13th Memory After Collecting The Other 12

If you collect 12 cameras that have been unlocked from the beginning and report them to Impa, you will be informed that there is a final camera. Take note that there is no point in going to the 13th place before you have collected all 12 Memories.

An Ending Will Be Added If You Collect 13 Cards

There's an additional ending when all 13 Memories are collected.Instead of a branching ending, it only adds a scene to the ending, which can be seen as a conventional ending.

You Can Rewatch The Ending Scene Again From Adventure Log

cutscenes that can be seen in various parts of camera can be viewed again from "Remembered memories" in Adventure Log. Check it out if you want to reread the story.