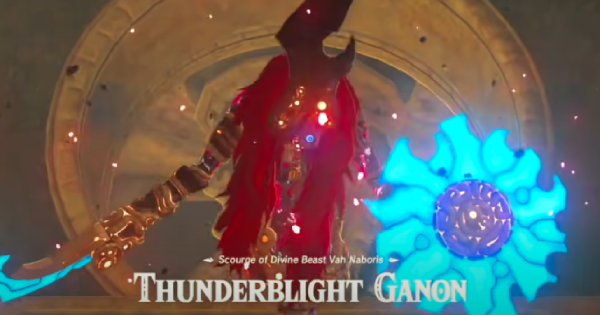 BotW | Zelda Breath Of The Wild
How To Defeat Thunderblight Ganon

How To Defeat Thunderblight Ganon Easily

Thunderblight Ganon is one of the most diffucult among all the bosses. Preparing weapons and armor, as well as foods and elixirs, will make this challenge easier, prepare as much as you can.

Swords and Spears Are Easy To Use

Blight Ganon's strength lies in his fast movement that he moves away from you as soon as he closes the gap in an instant. The Swords with fast attacks and the Spears with logh-range attacks are especially recommended, as they can surely inflict damage even when he's only open for a second.

Get Weapons From Guardians Inside Divine Beasts

There are multiple Guardians inside Divine Beast Vah Naboris. Be sure to pick up the knives and spears from the Guardians after you defeated them.

In the first phase, the easiest way to deal damage is to attack your enemy right after defending against his attacks with a shield. Therefore, it is useful to have several shields in advance to help you attack.

From the second phase, Ganon will be able to strike his weapons with lightning, and if you use iron weapons to defend, you will receive a shock effect, which will cause damage and make you drop the weapon. Equip wooden weapons and shields from the Guardians.

Get Dragonbone Boko Shield Under The Woodland Tower

You can get the Dragonbone Boko Shield on the board at the bottom of the Woodland Tower. There is no need to defeat enemies to get it, so if you need it, go get it.

Obtain The Guardian Shield In The Shrine

The Guardian Shield is one of the non-mental shields. You can get it from the Guardians in Ancien Shrines, but if you want to get the Guardian Shield++, you need to complete the Trial of Power Extreme. There are simple guides listed in the following article, please refer to it when you're going to challenge.

In order to defeat Ganon quickly and easily, you should prepae foods and elixirs more thoroughly than usual. If you are worried about being hit, prepare not only the foods that increase defense power, but also those that increase attack power and Shock Resistance.

Food Effects You Should Prepare

The Lv of attack/defense is up to you, but you have to reach Lv3 of Shock Resistance to nullify the shock damage, if you are suffering from the shock effect, you should prepare it.

Prepare Rubber Equipment Even It Takes Time And Effort

There is a set of rubber equipment that increases your Shock Resistance and provides a set bonus of Unshockable. It is not available at the store, and it takes a lot of time and effort to prepare, because you have to upgrade the equipment to "★★" at the Great Fairy Fountain, but it is one of the best options.

How To Get Rubber Equipment

Destroy The Shield To Attack His Body

In the first phase, destroy Blight Ganon's shield after he approaches and attacks Link. You have two options to deal with Blight Ganon's attacks: defend with your shield or run away. It is recommended to defend with the shield and then attack, as it is easier to attack before Ganon run away.

Destroy The Shield→ Attack Certain Times→ Aim For The Stun

After destroying the shield, attack his body immediately. If you give him more than a certain number of attacks, you can stun him. This is a great chance to damage Thunderblight Ganon, be sure not to miss it.

If you are using a Spear or a Claymore instead of a Sword, be sure to put it away with the B button after attacking. Since both hands are occupied with the weapon, you will not be able to put up your shield instantly.

Ganon will throw 3 balls of lightning at you, but don't panic, just avoid them by walking sideways. The balls will disappear after boucing several times, so be careful not to move around too much or you might be hit.

Use Arrows To Stun Him After Destroying The Shield

After Ganon's shield is destroyed, he will throw balls of lightning at you for a short while witout a shield. If you can hit Blight Ganon in the eye with a bow while avoiding the ball of lightning during this time, you can stun him again. Since it is quite difficult, there is no need to go for it, but you can try if you're confident.

Grab A Thunder Pillar With Magnesis

When Ganon starts his second phase, he first sticks a large number of thunder pillars into the ground, and then attacks with lightning strikes one by one. You can proceed to the next level by grabbing one of these pillars with your Magnesis and hitting Blight Ganon himself with a lightning strike.

If you focus too much on trying to hit the thunder pillar to Blight Ganon, you might accidentally get too close to other pillars. Make it your first priority to stay away from other thunder pillars above all else, as you will be damaged by lightning strikes.

In the second phase, not only enemy's weapon/shield will be added the lightning attribute, but also the attack patterns will increase. You can prevent some patterns by holding up a non-metal shield, but there is an attack pattern which will bounce off your shield . Unless you are very good at action, the easiest way to deal with is to keep running away.

It'd Be Too Late To Move After The Enamy Starts Moving

To avoid Blight Ganon's attacks, it is too late to move after hs has attacked. You can avoid being hit by walking around in advance and running to the front when the enemy starts to move.

An attack that cleaves you while spinning horizontally.

An attack that bounces off a shield. If you are holding your shield, it will be bounced off and you will receive the damage right after that. It is possible to counterattack with Perfect Guard, but it is too difficult to do.

Attacks In The Order of ①→②→③

Basically, Ganon attacks in the order of①→②→③. The shield-off attack of ③ is especially hard to counter with Perfect Guard, so be sure to avoid it.

Watch Out For The Right Moment To Attack!

When The Lightning of Shield Is Off

When the lightning effect of Blight Ganon's shield wears off, it is the time to counterback. If the lightning effect has attached to his sword, use a non-metal shield to prevent it, and destroy his shield in the same way as the first phase during the attack pattern 1 and 2.

When Ganon's HP is down, he will start to fire laser beams, focus on avoid these beams. You can use the footholds inside Vah Naboris as a wall to block the laser beams.