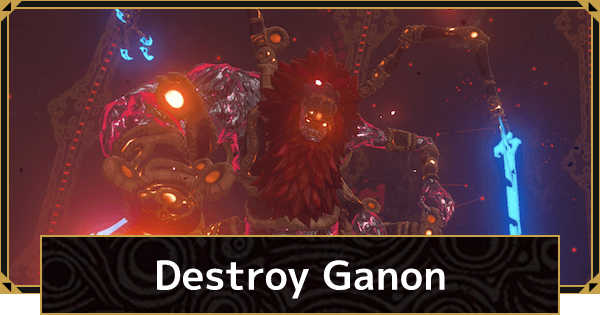 Destroy Ganon is a quest in Zelda Breath of the Wild (BotW). This guide includes how to defeat Calamity Ganon / Dark Dark Beast Ganon and things to do before the challenge.

Things To Do Before Beating Calamity Ganon

Free All the Divine Beasts First

Even the main quest "Destroy Ganon" is possible to take on from the beginning, but if you are not confident in your skills, just leave if for later. It is safer to start with the other main quest, "Free the Divine Beasts".

See How To Free the Divine Beasts

If you take on Calamity Ganon without freeing the four Divine Beasts, you will have to fight up to four Blight Ganons here before Calamity Ganon. It is not impossible to win, but it is not recommended because it requires a great deal of skill.

Get the Master Sword

In the battle against Ganon and in Hyrule Castle, the attack power of the Master Sword will be increased, and you will be able to deal 60 damage without DLC or other enhancements. The difficulty of exploring Hyrule Castle changes dramatically depending on whether or not you have the Master Sword, so it is definitely a weapon you have to get.

High-Attack Weapons Can Be Obtained Inside Hyrule Castle

Inside Hyrule Castle, you can find many high-attack weapons such as the Royal Guard Set. Weapons and other equipment can be obtained by exploring inside, and it'd be easier if you have the Master Sword with you.

It'd be better to prepare the Ancient Shield at the Akkala Ancient Tech Lab. Calamity Ganon fire beams frequently during the battle, and you would be able to reflect them by simply holding your shield. This is one piece of equipment you must have if you are not good at Perfect Guard.

Don't forget to obtain and upgrade not only weapons but also armor. Excellent armor can be obtained at shrines and other locations throughout Hyrule, so be sure to explore the area thoroughly. The following article provides a list of recommended armor.

Inside Hyrule Castle and in the battle against Ganon, you will take more damage, so be sure to prepare food for recovery. Especially the Hearty Foods made from Hearty materials are highly recommended for boss battles, as it will recover HP to the maximum.

It is also useful to catch "Fairies" which are easy to get near the Great Fairy Fountain. They have an excellent effect of automatically recovering HP on the spot, even if your HP reaches 0.

Best To Inflict Damage With A Bow

In the battle against Ganon, it is difficult to stay in close at all times. The more powerful bows and arrows you have, the more damage you can inflict, so be prepared. Shooting in the head is especially effective, so aim aggressively.

When Ganon Is Stuck To the Wall, Drop Him With A Headshot

When Ganon is stuck to the wall, you can shoot him down with a single headshot. It is difficult to aim because of its fast movement, but if you use the slow motion by Revali's Gale, it'd be easier to hit.

Ganon Will Attack With A Flaming Wword When In Close Range

When you get close to Calamity Ganon, he will attack with a flaming great sword frequently. There are two patterns: horizontal sweep / vertical slash, both leave flames on the spot. This attack is also a chance to aim for a Flurry Rush, so try it if you're able to make it.

Can Also Use The Updraft To Deal Damage With The Bow

After the attacks of flaming sword, an updraft is generated from the flames, allowing you to fly with the Paraglider. You can aim for a headshot with your bow in this way, so if you are not good at Flurry Rush, use this strategy to gain damage.

Best To Bounce Beams Back

You should bounce the beam from Ganon's left hand back as much as possible. Because it can cause Ganon to fall over while inflicting damage at him. The best way to bounce back is using Daruk's Protection or Ancient Shield. You can avoid them if you run to the side, but bouncing them back is more efficient.

Focus On Avoiding Other Attacks

*If you haven't completed the four divine beasts, it will change into its second phase with 50% HP remaining.

The second phase starts when Calamity Ganon's body begins to glow red. At this moment, he is invincible, wouldn't take any damage, so do not waste time attacking him. Since the invincibility can be removed by certain attacks, aim for the right moment.

Urbosa's Fury Is The Best

The easiest way to break invincibility is to use Urbosa's Fury. It can paralyze Ganon while causing him to fall over, allowing for a follow-up attack. If you have saved up the Urbosa's Fury during the first phase, you will have 3 shots left, you can defeat the second phase by using them all.

Daruk's Protection Is Also Effective To The Beam

Bouncing Ganon's beam back is also able to remove the invincibility, if you have Daruk's Protection left, you can use it here. If you have Ancient Shield, just hold it up, so you will have a chance even during the Guardian Beam.

How To Defeat Dark Beast Ganon

Get and Equip the Bow of Light In Front of You

In the battle against Dark Beast Ganon, you will suddenly go outside and start riding a horse. First, get the Bow of Light in front of you. It will not be yours automatically, you have to go straight and take the bow first.

Basically, the only damage you can inflict to Dark Beast Ganon is with the Bow of Light, so don't forget to equip it. Note that just taking it will not equip to you.

Shoot Bow of Light In 3 Places On Each Side

A short time after the battle begins, Princess Zelda will tell you that she will restrain Ganon's power. Until then, you don't have to do anything, but when Ganon's power is restrained, circles of light appear at three places on each side that you should hit with your bow. If you move to the left or right, it will be easier to hit the circle of light.

Jump From The Horse To Hit It In Slow Motion

Since it is quite difficult to adjust your aim while riding a horse, it is better to jump from the horse and hit it in slow motion. If you happen to lose your horse after getting off, you can call it back by whistling with the cross key.

Better To Stand By A Little Away

Since you will take damage when touching Dark Beast Ganon, there is no need to stay close to him all the time. The circle of light does not disappear immediately, so it is enough to head for it from a little distance away. There is no time limit on completing the battle, so take your time and don't rush.

A Circle of Light Appears on His Stomach After 6 Shots

After finishing six shots on each side, a circle of light will appear on Ganon's stomach. It'd be safe and easy to ride a horse heading to his stomach, then get off and wait. There is no need to stay on the horse, so keep in mind that you can also get there on foot.

Use Revali's Gale For The Final Shot On Head

When you have shot all the circles of light, get close to the face of Dark Beast Ganon. [Link! Look up there! That's the very core of Ganon's being! Do what you must, Link! ] After that, a Malice will appear on his head, hit it with the Bow of Light to finish the battle.

It is difficult to hit the target while riding a horse or from the ground, it'd be better to use Revali's Gale to fly up into the sky. Ganon's attacks also create updrafts, so you can use that as well.