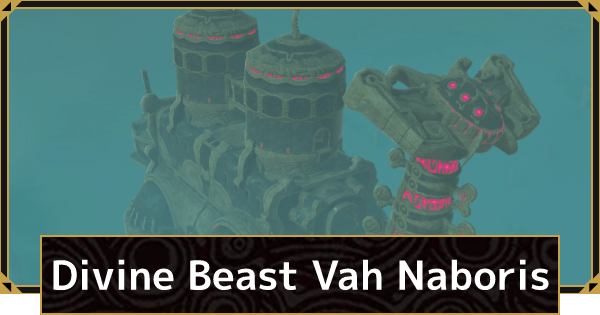 Divine Beast Vah Naboris is a quest in Zelda Breath of the Wild (BotW). Learn the full walkthrough and the locations of terminals and treasure chests in this guide.

*Unlocking the Terminals is not in order, here is listed as an example.

From Getting the Map to Activating Second Terminal

From Third Terminal To Fourth Terminal

Untill All the Terminals are Activated

Vah Naboris's legs can be destroyed by shooting them with two Bomb Arrows. Note that not to use other arrows, because they will not deal damage at all. Use the 20 arrows Riju gave to you at the Lookout Post.

If you use a special bow that can fire 2~3 shots in one attack, you can destroy the legs in one shot. The easiest to get is the "Duplex Bow" which can be picked up during completing the Yiga Clan Hideout.

Against the Lightning With Riju's Barrier

Before infiltrating Vah Naboris, he will strike lightning onto Link. When a purple ring appears around Link, it is a signal that lightning is about to strike, so ride your Sand Seal to get inside Riju's barrier to prevent damage.

Better to Slow Down When Entering the Barrier

Riju is slower than Link, so she will almost certainly be behind him after dashing to get close enough to hit Vah Naboris with the Bomb Arrow. Therefore, after firing the arrow, slow down and wait for Riju to arrive. Then move the stick forward to slightly adjust your position to stay within the barrier.

If you are not good at moving while staying inside the barrier, you can get off from the Sand Seal once to avoid the lightning. Riju will also stay in place to keep the protection.

If you stay too long, Riju will ask you to return to the Lookout Post, choosing to continue can solve this.

Map Inside Vah Naboris and Locations of Terminals

Operate the Rotating Device to Solve the Gimmick

Once you have the map of Vah Naboris, you can move the three rotating devices in its torso. Each of them can change its direction by 90 degrees in a total of four directions, and it can be the most complicated gimmick among all the Divine Beasts.

Check the Nodes on the Rotating Devices

Each of the rotating devices has nodes that connects electricity, and you can check the position of the nodes in the video and image before proceeding. It is essential to keep track of which state you are in on the game screen.

As you proceed along the path from the starting point, the first priority is the treasure chest directly in front of you. If you fail to pick up the treasure chest, it will fall and disappear. To revive it, you will need to return to the entrance with a warp, so be sure to pick it up first to avoid starting over.

▼See How To Get the Hanging Treasure Chest

You can warp directly to the entrance before getting the map.

Before getting the map, if you fail to get the treasure chest, you can warp back to the entrance and the treasure chest will appear again. But if you got the map, you will have to go to the another warp point and then warp to Vah Naboris, so it'd be better if you get the map later.

Climb the Foothold to Get the Map

You can get the map of Vah Naboris by climbing the foothold on the side where the hanging treasure chest is.

Turn Right From Where the Map Is and Go Outside

From the main terminal which you can find from the room where the map was, turn right to go outdoors. Continue to the right and go to the base of the right foot.

Turn the Rotating Device On the Tail Side

Turn the rotating device on the head side so that the bar position is down. In the initial state, you only need to turn twice. Once the bar in is the position shown in the image above, move forward to the foothold without the terminal.

Turn the Rotating Device On the Head Side Twice Again

After proceeding to the location shown in the previous image, turn the rotating device on the head side twice to return it to its initial state. Link can also go up while being caught on the foothold, and activate the terminal.

▲Jump to the next foothold.

Move the Rotating Device to Energize the Head

At that moment, the door to get the treasure chest 6 will open, so go to get it.

When the electricity flows, the large circular platform on the head side starts to rotate. Either of the two holes on the outside are enterable, get in and go to the top.

Operate the Handle To Energize the Light Bulb

Go out to the upper outdoor aream, you will find a handle in the center. By turning this handle clockwise/counterclockwise, you can rotate the parts with light bulbs on either side. If you make both bulbs hit the green wire of electricity, the head will rise up so that you can reach the terminal.

Move the Iron Gimmick To Energize It

Use the Magnesis to move the iron gimmick, which you can find as soon as you reach the top of the tail side. Electricity from the inside of the tail will pass all the way to the back, and the tail can be raised or lowered.

Use the Rotating Device to Raise and Lower the Tail

To get to the hump or back, you have to move to the bulb position with the tail down and then raise the tail. This can be done with or without energization, so use the rotating device in the middle or on the tail side to raise or lower the tail.

Turn the Handle To Energize It

Defeat the Malice which you can find when entering the hump on the tail side. There is a ladder nearby, and when you climb it, you will see a handle. By turning the handle, the floor below will rotate, and the light bulb will be energized. Which activates the movable lift in the middle and allows you to go to the hump to the head side.

Defeat the Malice Under the Terminal

After moving from the tail side to the hump on the head, defeat the Guardian on the lift. There is a Malice under the terminal which is hard to find due to the lift. Defeat it and activate the terminal.

Put the Ball On the Pedestal To Open the Door

Place the two iron balls on the pedestal near the door. Which energizes the device and open the door so that you can activate the terminal. If it does not work, check to make sure that all the bars of the rotating devices are upward.

Enter through the hole in the back

The fifth terminal is inside the back. Defeat the Malice on the hump of tail side, the hole in the back will be unlocked, which allows you to enter through it. By defeating the two guardians inside, the door will open and you can freely enter and exit.

In the lower level of the hump of head side, there is a switch-like thing outside the door. The door can be opened by striking a shock arrow into this, it will not matter which way you go. This is a good way to go if you don't want to deal with two guardians in a closed space.

Carry the Two Iron Balls Into the Room

One is at the top of the hump on the head side. Take the lift to the top.

The other one is in the middle of the hump on the tail side. There is a treasure chest on the other side, don't forget to take this one.

1：Treasure Chest Hanging On A String

2：Base of the Left Foot, Where Can Be Entered From Outside

From the location where the map is, if you don't turn the rotating device, it should look like the image above. At this point, go to the left from the main terminal to go outdoors. Once outdoors, go left to reach a small room with a treasure chest.

3：Beyond the Wall That Can Be Destroyed By Remote Bombs

To the left and right of the rotating device on the head side, there are walls that can be destroyed by Remote Bombs. The treasure chest is behind the wall on the right side of Vah Naboris, and you can get it with the Magnesis.

From the small room where you get the map, you can easily reach it by proceeding as shown in the image above. The rotating device can be left in its initial state. (The bar of the rotating device on the head side is upward and the bars of the middle and tail side are downward.)

4, 5：Turn the Rotating Device In the Middle

Follow the steps above to get the two treasure chests.

6：Treasure Chest Beyond the Closed Door On the Head Side

First, go to the closed door on the head side. You can get here from the location of Terminal 2 or a higher place than the door by using the Paraglider.

Turn the rotating devices of head and middle so that the bars are both upward. Then, the power will pass through ans the door will open.

Proceed To the End While Avoiding the Gimmick

When the door opens, you will be able to proceed to the area around the head of Vah Nabolis. There are gimmicks here, such as many Malices and lasers, avoid them as you proceed to the end.

First, go to the top of tail and make sure the tail is downward. To lower the tail, use the rotating device to remove it if it is energized.

Fly from the tail with the Paraglider, and move to the back side where you can find a treasure chest. If you want to go back, you need to go down once. You can get to the foothold where the hanging treasure chest is, and return to the inside from there.

8：Near the Middle of the Hump On the Tail

While moving down by the lift in the hump of tail side, you will find a treasure chest on a high platform. Since it is made of steel, you can grab it with the Magnesis and pull it down, or you can go to the high platform. If you want to go there, there is a Malice at the bottom of hump that summons enemies, you should defeat it first.

9：Top of the Hump On the Tail Side

The boss is Thunderblight Ganon. Many players may feel that he is much stronger than the other Blight Ganons nestled in Divine Beasts. Prepare equipment, foodm and elixir more than usual, and take on the challenge in perfect condition.

See How To Defeat Thunderblight Ganon