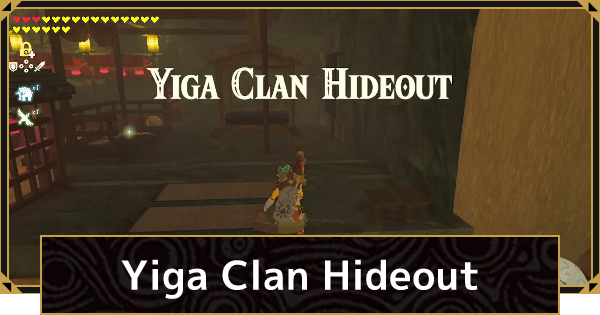 Yiga Clan Hideout is a main quest in Zelda Breath of the Wild (BotW). Learn the full quest walkthrough, how to avoid enemies, and the location of the treasure chests in this guide.

How To Get To Yiga Clan Hideout

Take the Sand Seal in Gerudo Town and go through the valley as shown in the above image. Since your walking speed slows down on the sand, you should travel with the Sand Seal.

Go On Foot From the Halfway

If you proceed to some extent, you will not be able to pass on the Sand Seal. From there, you need to follow the path through the valley to reach Yiga Clan Hideout on foot.

Complete The Nearby Sho Dantu Shrine

Get off the Sand Seal and there is a shrine pedestal a little off the road. If you place a Luminous Stone on this pedestal, the Sho Dantu Shrine will appear. There aren't many warp locations near the Yiga Clan Hideout, make it a priority to activate this shrine.

Continue While Defeating The Yiga Clan That Appears

Proceed while defeating the Yiga Clan that appears along the way. You'll have to deal with three of them at once in front of the hideout. Even if you ignore them, they will still chase you, so it's best to defeat them one by one.

Burn the Banners To Find the Entrance

Proceed across the Karusa Valley until you reach a room with a bonfire in the middle. At first glance, it looks like an empty room, but there are six banners around it that can be burned, one of which hides the entrance to the hideout. Use a nearby Torch to burn the banners.

There are treasure chests in two of these rooms. The rest of them only have Keese appearing, so you can ignore them.

Proceed Without Being Spotted By The Yiga Blademaster

You Cannot Save Game Inside The Hideout

You will no longer be able to save game once inside the Yiga Clan Hideout. If the game is over in the middle, you will have to start over from the entrance, so proceed carefully.

Recognize Where the Enemies Are With Champion's Tunic

Enemies' Life Gauge will now be visible when equipped with the Champion's Tunic, obtainable from the Main Quest Captured Memories. You are able to recognize Yiga Blademaster's movements even through the walls, making it easier to attack them.

Use Mighty Bananas To Lure The Yiga Blademasters Blocking Passageways

Yiga Blademasters love Mighty Bananas and have a habit of advancing towards bananas they found. You can lure the Yiga Blademaster by placing bananas which you picked up along the way or shot from the boards with your bow.

Using Mighty Bananas is a good way, but you can also use Stasis + to stop the enemies from moving. It is more reliable than using bananas, so you can use it depending on where you are.

There Is Also A Strategy Using Sneakstrike

Sneakstrike, which can be activated by slowly approaching an enemy from behind, can take down the Yiga Blademaster in one shot with any weapon. Since they might drop items such as ores and bananas, it is also an option to defeat them one by one and explore the area. But be aware that if an enemy finds you, it will almost be a game over.

Climb the Ladder To the Second Floor

Use the ladder you found after passing the first room to go upstairs. At the top of the ladder, there are tons of Mighty Bananas and treasure chests.

Burn the Banners To Find the Hidden Room

Burning the middle one of the three banners on the second floor reveals the path to the hidden room. There are two treasure chests with a total of 600 Rupees in the hidden room, make sure to stop by. The easiest way is using a Fire Arrow, but you can also light the Torch with a nearby bonfire.

If you go all the way to the top, you will reach a room with a treasure chest in the middle. There is a door on the wall of this room that can be opened using Magnesis, and if you go ahead, you will find the boss, Master Kohga. In addition, there are 3 treasure chests around this room that can be grabbed with Magnesis, so don't forget to get them.

1, 2：Inside the Banners At the Entrance To the Hideout

There are two treasure chests behind the banners at the entrance of the hideout.

3：Near the Yiga Blademaster on the 1st Floor

4：On the Side of A Large Amount of Mighty Bananas

Use the ladder to the second floor, there is a treasure chest next to the place where a large number of Mighty Bananas are placed.

5, 6：Inside the Hidden Room

There are two treasure chests in the hidden room. You can go to this hidden room by burning the middle one of the banners on the right after entering the second floor.

8：Above the Passageway To the Final Floor

There is a treasure chest can be reached from the same footholds as 7. Be careful, the Yiga Blademaster will find you if you fall.

There are four treasure chests in the deepest room. Three of them are buried in the sand and must be grabbed out with Magnesis.