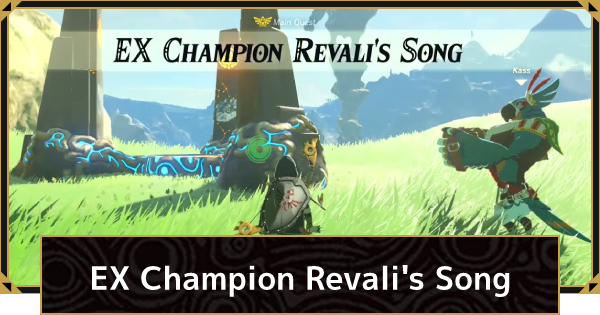 EX Champion Revali's Song is a main quest in Zelda Breath Of The Wild (BotW). Learn how to start the EX quest and how to defeat the Windblight Ganon boss in this walkthrough guide.

Occurs When Approaching A Stone Monument Near Tabantha Tower In Hebra

After completing EX The Champions' Ballad, approach the stone monument that appears in Hebra and you will encounter EX Champion Revali's Song. Based on the hints in Kass's poem, head to the three locations and activate the shrines appear before completing them.

Find the location of the trial by referring to the picture on the stone monument. The three locations in the image above are the relevant locations. Head to each and complete the Trial.

A little south of Tabantha Hills, below the cliffs, there is a bonfire and Rito's Mazli. You will need to wait here to meet your target, Dinraal.

Wait Until Around 12:00 PM At Night At The Bonfire

Dinraal spawns at night, so use a nearby campfire to change the time to night. At night, Mazli's location changes a little, so head there and wait until around 12:00 AM. Around 12:00 AM, Dinraal appears along the valley.

Shoot With Bow When The Horns Are Glowing Blue

Around 1:00 AM, the corners of Dinraal begins to glow blue. Use the Paraglider to approach Dinraal at this time. A shrine will appear when you attack the horn with a bow. A shard of Dinraal's Horn will also fall, so it is a good idea to get it on your way to the shrine.

Aim For The Ring South Of Hebra Peak

Hebra Peak is drawn on the hint of the stone monument. Head over here and look for a ring of blue light. If you have already activated Goma Asaagh Shrine, the best way is to warp here and then go to the ring.

Use fire-attribute weapons or bonfires to melt the ice that blocks the entrance to the shrine and control terminals. If it's a fire-attribute weapon, it will gradually melt as soon as you get close to the ice just by equipping it. The same goes for using a campfire; just build the campfire by the ice.

Go Through The Ring With Shield Surf

After passing through the first ring, a new ring will appear ahead of it, and finally a shrine will appear. There is a time limit for the ring, so walking normally will not make it in time. Since it is downhill, the fastest way to get through is to use Shield Surf. It is best to prepare several Shields in case of failure.

The difficult thing in this trial is to hit four targets in one slow motion. It consumes a large amount of stamina, so if you're not confident in your skills, it's a good idea to prepare atleast 3 stamina gauge. It is also recommended to prepare food that can increase the maximum value of the stamina gauge.

In the trial here, it is recommended to eat food that increases the maximum value of the gauge instead of restoring the stamina gauge. Those with "Endura" at the beginning of its name are the target, and among them, Endura Carrot is recommended because it has a large effect value.

Use The Swallow Bow Nearby

Use the Swallow Bow in the Flight Range. This bow can shoot arrow faster than other bows. If you have another bow with a quick shot effect, it is not necessary, but if you do not have any, select this bow.

Looking from the side of the flight range building, there are three targets in a row behind the rock in the middle. It is recommended to break the target here and aim at one of the pieces on the rock face on the other side.

Fight With The Equipment You Have Decided To Use

The boss is Windblight Ganon. There is no change in the pattern of behavior when they appeared in the dungeon of Vah Medoh, so the strategy is the same. Note, however, that Link's equipment cannot be freely changed, limiting his means of attack.

Since there is only one weapon, it is difficult to fight mainly with melee attacks. Using Bow's slow motion, the main tactic is to use Arrow to deal damage.

Champion's Ability Should Be Fully Recharged For The Challenge

Try to keep the champion's ability fully charged, including Mipha's Grace and Daruk's Protection. Urbosa's Fury after getting knocked down can do a lot of damage, so if you aim for this, you can defeat it relatively easily.