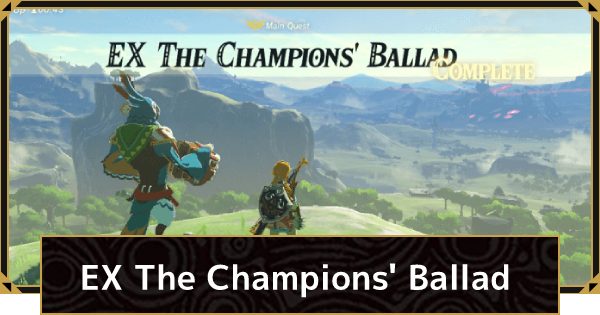 EX The Champions' Ballad is a main quest in Zelda Breath of The Wild (BotW). Learn the walkthrough, features of all the quests, how to prepare, map, and useful items in this guide.

Strategy Guide For Each Area

A Trial With A Mere Quarter of HP

EX The Champions' Ballad is a trial in which Link's HP is always a quarter of a Heart remaining. In other words, it is required to stand around and not take a single damage, as any damage will kill you instantly.

Food can be brought in, but it is meaningless as the HP will be gone soon after recovery. Note that any means of recovery will be lost. However, the buffs of cooking are effective and you may eat them when it is necessary.

Attack Items Other Than Weapons Can Be Used

Runes, Bows, Shields and other items can be brought in and used as they are. Therefore, having some strong weapons in advance makes it more efficient to deal damage other than the One-Hit Obliterator.

Champion's Abilities Are Not Available

All Champion's Abilities, such as Mipha's Grace, will be disabled at all times during this challenge.

The One-Hit Obliterator, which can kill an enemy with a single blow, can attack up to two times in a row. Keep in mind that after about 5 seconds, it will glow again and the one-hit effect will be recharged.

Hitting a tree or a wooden trap with thorns with the One-Hit Obliterator is counted as one attack. Be careful not to attack non-enemies by mistake.

Even If The Effect Has Expired, It Can Still Deal One Damage

If you attack an enemy while the One-Hit effect is off, you can still deal 1 damage. If the enemy's Health is low enough, you can attack without waiting for the effect, so keep that in mind. In addition, you cannot destroy trees etc. when the effect has expired.

You Can Abort The Quest By Leaving The Great Plateau

The quest can be stopped by leaving the Great Plateau. Hearts will also be fully restored, so there is nothing to worry about after that. If you feel that you are not prepared enough, use warp to get back and prepare yourself.

The Enemy Will Respawn If You Leave Halfway

Note that if you leave the quest without wiping out the nest of monsters, the enemies will respawn. As long as you defeat all the enemies and unlock the shrine, you don't have to start all over again.

Majora's Mask and Champion's Tunic are recommended gear for this quest. Both are relatively easy to obtain, so better to prepare them. Cold resistance for feet is required when exploring around Mount Hylia, bring the Snowquill Trousers.

Upgrading Remote Bomb and Stasis in advance wll give you an advantage. The attack power of the bomb would be raised from 12 to 24, allowing you deal damage more efficiently. Stasis can stop enemies from moving, which is convenient in case of emergency.

Defeat The Silver Bokoblin On The Tree First

Defeat the Silver Bokoblin on the big stump first. Climb up the tree in front of you and defeat the Red Bokoblin. Because this Red Bokoblin will summon its allies with a whistle when it finds you.

Deal The Horde of Keese With A Bow

There are hordes of Keese around the stump where the Silver Bokoblin is. Be careful, as Majora's Mask is ineffective against the hordes of Keese. Aim from a distance, as you can defeat them with a single Bow hit.

Use Bombs And Bows From Above After Defeating Silver Bokoblin

Once defeat the Silver Bokoblin with the One-Hit Obliterator, destroy the nearby beehives by dropping bombs on them. After that, use bombs and bows on top of the stumps to defeat the Bokoblins below. Priority should be given to Red Bokoblin/Blue Bokoblin, and if there are any Black Bokoblin or others left, use One-Hit Obliterator to take them down.

Note That There Is A Place Where Chuchu Appears Below

Note that Chuchu will appear when you go down from the stump. It moves slowly, so it's safe to keep a distance and kill it with a bomb. If there are no Bokoblins around, it is fine to use the sword.

Attack From The South Side

It is recommended to warp to Ja Baij Shrine and attack from the south side. Since many of the Lizalfos are under high ground on the north side, you are likely to receive damage from this side. Starts from the green Lizalfos on the high ground.

Escape To The South Side If Spotted By Enemies

Even if the enemy finds you, there will be no problem as long as you run to the south. Green Lizalfos will attack with a bow, so if you keep your distance, you won't get hit. Silver Lizalfos and others will close the distance, so lure them in and take them down with One-Hit Obliterator.

Note That There Is One Guardian

Be careful that there is a Guardian near the high ground. As long as you don't get too close, there's no problem, just leave it alone. You can also defeat it with One-Hit Obliterator if you have time.

Aim From The High Ground

Attack from the high ground south of the Temple of Time. If you go down to fight from the beginning, you might be surrounded and defeated.

Defeat The Bokoblin On Horseback First

There is one Blue Bokoblin on horseback on each side. Because of their fast movement and long-range weapons, they are the most troublesome enemies. They will fall off the horses if you hit them with a bow or bomb, so drag them down from the horse first.

Defeat Lizalfos On The Rocks At The Next Point

Next, defeat the Lizalfos on the rocks in the middle and on the left and right. You don't have to wipe out all of them, just start with the Lizalfos on either side to give Link more space to attack.

Take Them Out One By One If They Find You

If you've defeated at least one Bokoblin on horseback or one Lizalfos on a rock, don't panic if others found you. Enemies other than Lizalfos move slowly, so in case you think you're in danger, you can blow them away with a bomb to keep your distance.

Aim For The Top of Mount Hylia From Keh Namut Shrine

Warp to Keh Namut Shrine and head northwest to the top of Mount Hylia. It is recommended tto reach the high ground where you can look down the monsters nest so that you can attack them unilaterally.

You can defeat Ice Wizzrobe and Ice-Breath Lizalfos in Monsters' Nest in one hit with a fire attack. Use Fire Arrows and Bomb Arrows from the top of the high ground to defeat them.

Defeat The Moblin Around The Campfire With A Bow

Defeat Black Moblins around the campfire with a bow. Since they won't fight back, you can keep attacking them unilaterally. There are 2 Black Moblins and 1 Silver Moblin around here, so it's recommended to defeat 1-2 Black Moblins, them use One-Hit Obliterator to take out the rest at once.