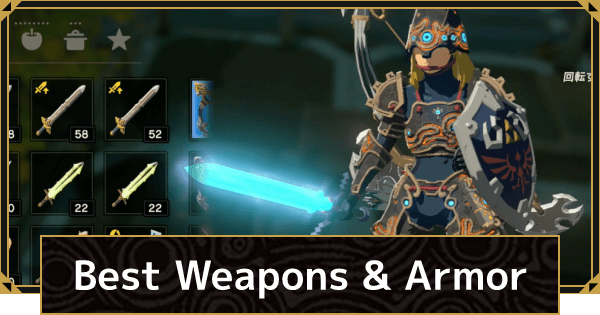 This is the Best Weapons & Armor guide for The Legend of Zelda: Breath of the Wild (BotW). Includes the best build set, stats, features, where to get, and how to get.

How To Get Best Sword

The Legendary Sword That Is Well Known

Master Sword, a sword that is familiar from Zelda's Legend, is the best sword. It becomes the most powerful weapon only after completing the Trial of the Sword quest from the DLC. The Master Sword can also be upgraded. Even if the number of uses hits 0, it still can be usable again after 10 minutes so do not have to worry about it.

Highest Total Damage of All Weapons

The amount of damage that can be dealt before the weapon breaks is the highest. If you fight against highly durable enemies and you are going to withstand long combat, it could greatly reduce the wear and tear on the weapon.

Fire Beams When Hearts Are At Max

When Link has max number of Hearts, press 'R' button to release a beam attack. It is a long-range attack that is only available from Master Sword, and it can be used with a variety of tactics. In addition, Master Sword's durability does not decrease when upgraded after completing the Trial of the Sword quest.

How To Get Master Sword

The only way to get the Master Sword is to pull it out from the pedestal that can be found in Korok Forest.

Hidden Until You Get 13 Hearts or More

Master Sword can be pulled out of the pedestal in Korok Forest but you need to have 13 Hearts or more. It costs 12 and 3/4 Hearts to pull the sword out, and it wouldn't work if you increase the limit of Hearts using food effects.

Enhance Around The Shrine

In order to get 13 Hearts, it is recommended to get heart containers from each Divine Beast and go to various shrines to collect Spirit Orbs and exchange them for Hearts. If you only want to get Hearts via shrines, you need complete 40 shrines.

How To Get The Best Shield

The Strongeset Class of Shield Guard

It has the highest class of Shield Guard among all shields and can tank most enemy attacks.

Durability is random when you get it but is the strongest class in terms of Durability. It can be used for a long time compared to other shields, which can prevent the Silver Lynel attack about 100 times.

How To Get Hylian Shield

Hylian Shield can be obtained from the treasure chest that appears after defeating Stalnox, which appears in a large room of Hyrule Castle Lockup.

Can Reclaim In Tarrey Town

If the Hylian Shield you own is damaged or lost, you can reclaim it by purchasing it from Granté for 3,000 Rupees. Granté can be found on the second floor balcony of a private house in Tarrey Town.

You can only possess 1 Hylian Shield unless a bug occurs.

How To Get Best Bow

The attack power applies per shot and the damage increases according to the number of hits. You can deal 5 times damage when using a bow with 5 shots in a row.

Better To Use As A Melee Attack

Lynel Bow's arrow has an excellent continuous-firing function but not suitable for long distances. Since the bow can spread 5 shots horizontally, the closer the target is, the more powerful the bow will be.

Get From Lynel In The Middle of The Game

Savage Lynel Bow can be obtained by defeating White-Maned Lynels or Silver Lynels, the strong enemies that can be found throughout Hyrule.

Number of Hits Are Random

Stable When Shooting & Easy To Get

Great Eagle Bow has outstanding usability among the Champions weapons. It can be obtained by after defeating Divine Beast Vah Medoh. It has almost all the features that make it easy to use as a bouw, including Quick Shot, long-range shooting, and 3 times in a row.

Since the attack power is only 28, it is slightly inferior to Savage Lynel Bow but its damage is sufficient. From defeating Divine Beasts to Destroy Ganon, there is no other bow you need if you already have one Great Eagle Bow.

Defeat Divine Beast Vah Medoh & Windblight Ganon, then you will receive it from Kaneli who can be found in Rito Village.

Getting It Again Could Be Troublesome

Its disadvantage is that it requires a Diamond for repairing, which is difficult to obtain, so it is difficult to reacquire once it is broken. But it is easy to use in that it can be rebuilt.

How To Get Best Armor

Increase Attack Power By 1.5 Times With The Set

Equipping the Barbarian set increases the attack power of the sword & bow by 1.5 times. It is the best armor for improving combative capabilities since it can boost the damage output.

Equipping 1 piece of Barbarian set increases the attack power by 1.2 times, and equipping 2 pieces increases it by 1.3 times. Although the bonus is greatly reduced compared with the whole set, the advantage is that it is also effective even with partial equipment.

How To Get Barbarian Set

Wearing the whole Ancient Set increases the attack power of Guardian weapons by 1.8 times. Guardian Sword, which has an attack power of 40, will increase to 72 which may exceed Master Sword.

How To Get Ancient Set

You can purchase Ancient Set from Cherry at the Akkala Ancient Tech Lab.