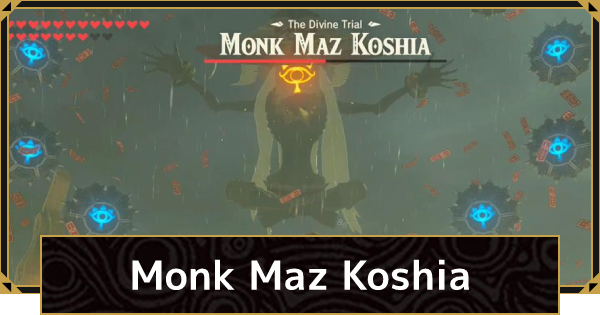 Monk Maz Koshia is a boss in Zelda Breath of The Wild (BotW). This guide includes the things to do before the battle, the useful items, the recommended equipment, and the tips to beat Monk Maz Koshia.

In the battle against Monk Maz Koshia, you should bring weapons and equipment with high attack power because of the enemy's high HP. Raise your attack power not only by weapons but also by the set bonuses of armor and cooking.

Other weapons such as Lynel's weapons and Royal Guard Set are also excellent. Try to collect weapons with high attack power as much as possible.

The Barbarian Set Is Recommended If You Don't Care About Weapons

Barbarian Set can be equipped to increase attack power. It is not a set effect, but a multiplier that can be applied to partial equipment. It is also highly versatile, as it can be used with any type of weapon. If you don't have it, go ahead to get it.

However, if you unify your weapons with Ancient/Guardian Set, it is recommended to set with Ancient Armor to raise more attack power.

Ancient Arrow And Savage Lynel Bow Are A Perfect Match

Ancient Arrow is very effective against Monk Maz Koshia and can inflict great damage. The combination of this with Savage Lynel Bow, which can fire three arrows at once, is an excellent match. And there is a chance to get a Five-Shot Savage Lynel Bow by rerolling, it'd be useful to have one.

Headshots are always effective against Monk Maz Koshia. It is difficult to aim because he moves fast, but if there is a chance, try to aim aggressively. You can also use Revali's Gale to aim for a headshot.

Champions' Abilities Should Be Fully Charged

Champions' Abilities are effective in many situations against Monk Maz Koshia. Especially Urbosa's Fury and Daruk's Protection can be used both for attack and defense, so be sure to charge them to the maximum before the challenge.

If you haven't upgraded Runes at Hateno Ancient Tech Lab, make it a priority to do so. Stasis + is especially useful as it allows you to stop the enemy's movement, and it can be used in many situations against Monk Maz Koshia.

Use Mighty Bananas Just Once!

Like Yiga Clan, Monk Maz Koshia can be caught off guard only once by Mighty Bananas. Since he will move away when getting damage, you should deal great damage in one hit then stop him with Stasis + to inflict more damage. It is possible to cut down his HP to 75% depending on the equipment.

Save Daruk's Protection Until The Third Phase

Easy To Aim For A Flurry Rush

In the First Phase, he slashes at you with quick movements like Thunderblight Ganon. This can be aimed for a Flurry Rush with a Backflip, so give it a try. If the timing is too fast, you will take damage, but if the timing is a little too slow, Flurry Rush will not be triggered and you can avoid it, so practice to be able to control the Backflip.

Defeat The Copies With Urbosa's Fury

From the Second Phase, he will split into 9 copies, each of which will attack with different movements. They won't be damaged except the real one, but they will disappear if being attacked even a little. Use Urbosa's Fury actively, as it can destroy all the copies at once and inflict stuns at the real one.

Remote Bombs And Other Ranged Attacks Are Also Effective

If you run out of Urbosa's Fury, other wide-range attacks are also effective, such as Remote Bomb or Savage Lynel Bow, which might be hard to aim but can hit multiple targets at once.

The Real One Reacts To Camera

Using Camera is an effective way to distinguish the real one. Since the copies won't react to the Camera, you can tell the real Monk Maz Koshia when the Camera is held up! However, you are defenseless when holding the Camera, so only check it when you have enough time.

In the Third Phase, Monk Maz Koshia grows to a huge size and attacks in a variety of ways. Among them, the lightning strike attack after nine iron balls are thrown is a chance to stun him. To avoid being hit, grab the last iron ball with Magnesis and carry it close to the boss. Lightning strikes will fall on the boss to stun him.

Bounce The Beams Back To Stun The Enemy

You can stun the boss in one shot by bouncing back the Guardian beams. It's also fine to use Perfect Guard, but if you have saved Daruk's Protection, use it here. Just hold down L2, and it will stun Monk Maz Koshia very easily!

Aim For Headshots With Arrows

The larger body makes it easier to hit with arrows, so you can go for headshots aggressively. Especially when his HP is below 25%, he will try to stomp on you in a standing positon, it'd be safer to aim with arrows than to approach carelessly. If you have extra Ancient Arrows, use them as much as you can.

The Equipment Used In This Video