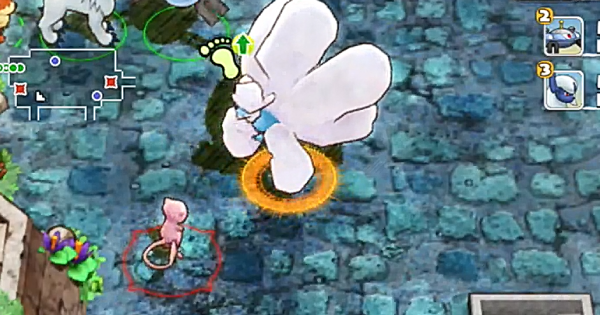 Find out how to recruit Mew in Pokemon Mystery Dungeon DX in this guide. This include Mew location in Buried Relic, tips to recruiting, how to get the music box, & more!

Found in Buried Relic B36F & Down

Mew can only be found from B36F and down of the Buried Relic Dungeon. It will appear randomly with no fixed location so you will have to seek it out in floor rooms to be able to find it.

Requires the Music Box to Spawn

Mew will not spawn unless you have the Music Box item. This item is made from dropped materials from the Regi Legendary Pokemon, requiring players to defeat them at least once!

How to Recruit Mew

Unlike other Legendary Pokemon, Mew is not a guaranteed recruit after being defeated. It's entirely possible that it will not join your team even after you defeat it.

Use Friend Bow to Increase Chance of Recruiting

A Friend Bow will increase the chance of recruiting Pokemon into your team. Have the leader of your party hold on to it when you find Mew in the dungeon then with the same Pokemon, defeat it to increase the chances of getting it!

Check Out How to Get the Friend Bow

Mew doesn't have a boss fight mechanic and acts like regular Pokemon in floors. It's not particularly strong and can be defeated easily with your Pokemon team.

Do Not Use A Move when Hit by Grudge Trap

The Grudge Trap will disable any move you use after being afflicted by it. This basically makes the PP of the move to 0. It's better to not use any moves until it wears off.