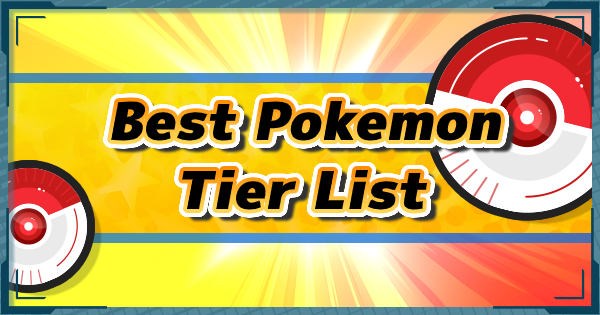 Learn about all the best Pokemon to include in your Team in this tier list for Pokemon Mystery Dungeon DX Switch! Includes recommended Pokemon for the early, mid, & end game.

Magnemite is a powerful ranged attacker with a good moveset, including Thunder Shock, Discharge, Signal Beam, Screech, & Light Screen. This gives you a lot of room to customize & link moves.

Signal Beam's range is particularly useful early on, as Magnemite can support you from the back.

Swablu is a great Pokemon for many reasons, including its access to Sing, Safeguard, and Refresh. However, most important is that at later levels it can use Dragon Dance & Fury Attack, which is an amazing combo. Post-game you'll want to evolve it to Altaria as soon as possible.

Altaria will be a great tool to have for boss battles post-game as well, so it's worth training up your Swablu & powering up Fury Attack as fast as possible!

Poochyena, a recruitable Pokemon from very early in game can be a reliable Pokemon from beginning to the end. Having multiple elemental Fang move (Fire, Electric, Ice) and support moves like Yawn or Howl makes him a versatile member. Mid to late game though, you'll probably want to swap it out for Absol.

This Pokemon is automatically recruited as a part of the story around mid-game and is surprisingly powerful. It also has a Mega Evolution, meaning using an Empowerment Seed will be even better for it.

Absol's main draw is its high attack and good move pool. You can deal incredible damage by linking two moves together, especially if you couple that with the Atk. boosting Swords Dance. Quick Attack also gives it a good ranged option, allowing it to fight while not at the front of your party.

Shiftry is a good choice if you're lacking a solid grass type on your team. Razor Leaf can reach up to 4 tiles away, and Razor Wind can hit every Pokemon in the room. Fake Out also gives it a good way to flinch foes and reduce damage. If you can't find Shiftry, its previous form, Nuzlocke, is also a good choice.

Beedrill's myriad multi-attack moves are a good option as well. Able to learn Twineedle, Fury Attack, and Pin Missile, it can deal pretty massive damage, especially so if you link them together.

NOTE: This list will be updated constantly as we discover what Pokemon work best in what situations.

This tier list is organized into 4 categories: S, A, B, and C. Pokemon which are listed here are ranked based on their ease of access / recruitment, eventual stat growth and accessible moves, and have been chosen by our Editor Team.

Let Us Know Your Suggestions!

Do you have a suggestion for a Pokemon to include on the Tier List? Give us your feedback in the comment section found at the bottom of this article!

Fury Attack and Dragon Dance, when linked together, can deal massive repeated damage to an enemy. This makes Altaria a great choice for taking down bosses.

Can Paralyze With Dragon Breath

Altaria retains the option of shutting down its opponent by getting a paralysis off with Dragon Breath. It can also use Sing to put opponents to sleep, if need be.

Icicle Crash is a massively powerful move that can multi-hit and destroy enemies. On top of this, Cloyster also has access to the long range damaging move Hydro Pump.

During a certain part of the story, Absol will automatically join your rank as one of your teammates. Although being a free recruit, this Pokemon is a formidable fighter, heavily catering towards damage output and boosts with use of the Sword Dance move. It can also learn Rock Slide, which helps vs. many of the legendary flying types in-game!

Absol has access to one of the rarer move, "Perish Song", a powerful move that can possibly defeat a target in a single shot (though it takes 3 turns to activate).

Alakazam's Psybeam is an excellent move due to its range, and of course, Alakazam's high Sp.Atk stat. Note that you'll need Evolution Crystals to evolve from Kadabra to Alakazam.

Crobat is an extremely fast Pokemon with the ability to cause a lot of disruption and deal good damage. Screech, when comboed with another physical attack can deal massive damage.

Magnezone evolves via Evolution Crystals from Magneton, which evolves from Magnemite (can be found in Mt. Steel). It has a good moveset, including Discharge (hitting all enemies in the room, excellent for Silver Trench and Stormy Sea), Screech, and Light Screen.

Magneton is a hard counter for water type Pokemon, as using the move Lock-on & Thunderbolt as a linked move will deal massive damage to enemies in its close vicinity.

Sonic Boom, a move available to learn by leveling Magneton, has a very long range, a fixed damage per hit, and has a 100% chance of hitting the target in range. Making Sonic Boom one of the most powerful moves in the Mystery Dungeon. This makes it a good option for level 1 dungeons like Wish Cave.

Can Be Recruited Mid-game

Nuzleaf can be recruited in the Uproar Forest, but you'll need evolution crystals to evolve it into Shiftry.

Nuzleaf learns the move Razor Wind, a powerful normal Type move that hits the entire room. It will be a viable ally to fall back to in case you're in a pinch like the monster den. Additionally, it can learn powerful long-range grass moves too.

Venusaur (and previous evolutions) has excellent status-condition inducing moves, like Sleep Powder and Poison Powder. Leech Seed also allows it to sustain itself vs. bosses.

If you are able to pick up a Bullet Seed TM, you will be able to make a powerful combo by linking it with buff moves such as Growth, available by leveling up. This seed combo will be its trump card when facing tougher opponents, although it does rely on you getting the TM in the first place.

Having access to powerful moves like the AoE Discharge or long ranged Signal Beam, this Pokemon is very powerful at giving ranged support to your allies. Dragon Pulse is also a viable move it can learn, to be used as a trump card when faced with tougher enemies.

Charizard is available as a starter or partner Pokemon choice at the beginning of the game, and its stat growth and available moves make it a solid choice to include in your party as both a single and multi-target damage dealer.

The move Heat Wave is the bread & butter for Charizard. This AoE move will change its features depending on whether the Charizard is in a corridor or a room, and has a massive area of effect, easily taking care of multiple targets thanks to its matching type damage boost.

Having one of the top tier DEF values, this Pokemon can be used as a means to tank enemy damage in certain situations, especially when using Withdraw or Iron Defense to boost up its attack. Eventually, it will learn Hydro Pump, which is an amazing long range water-type nuke.

Gengar will require Evolution Crystals in order to evolve from Haunter, but Haunter and Gastly should be easily accessible.

Lick and Hypnosis can paralyze and put opponents to sleep, making them a great choice to run on Gengar. Its originally high Sp.Atk stat also lends itself well to dpsing. It also has a Mega evolution, which can come in handy when combined with an empowerment seed.

Farfetch'd has an ability to learn a good variety of moves, including Flying, Dark, and Bug type moves. They can be a versatile party member to have if you are trying for dungeon with multiple types.

Sword Dance can give a huge boost to your Attack stat, and is a perfect move to have when you need some extra oomph to plow through thicker skinned enemies.

One of the Earliest Pokemon to Recruit

Poochyena can be recruited early, and its evolved form Mightyena is a versatile fighter with access to both offensive and supporting moves. Unfortunately, it is somewhat outclassed by Absol late-game.

Able to use multiple elemental Fang attacks (Fire, Electric, Ice) and support moves like Yawn and Howl makes him a solid choice even in late game.

Ursaring's decent attack, coupled with STAB Fury Swipes makes it a formidable threat. Hammer Arm gives it a nice fighting move, while access to Lick can let it act as your primary Paralyzer for boss fights.

Vileplume is a very good support with moves like Aromatherapy and Moonlight. It also has Petal Blizzard which hits every enemy in a room.

I was also coming down to the comments to recommend giving heracross a look. it carried my team through most of the game and with moves like brutal swing, c. combat, megahorn, and false swipe it's both a monster and a recruitment machine

(3/3) Skill Link is an ability that makes all multi hit moves hit the maximum amount of times that they can, which in the case of heracross, all of them hit 5 times. This in combination with the Rapid Bulls-Eye rare quality makes Heracross far and away the best damage dealer in the game.

(2/3) Earthquake hits the entire room and is really strong when there are other flying types in the party, and false swipe increases your recruit rate, which is really beneficial when linked with a multi hit move. Heracross also gets the ability Skill Link when using an empowerment seed.