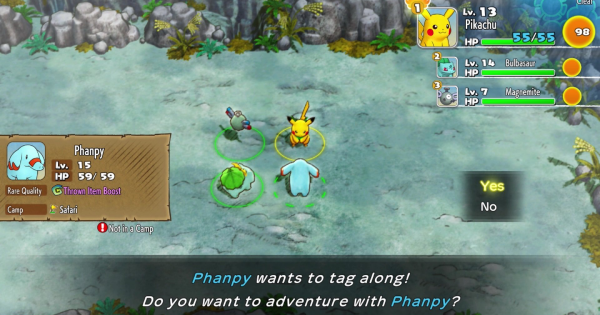 Learn how to recruit new Pokemon in Pokemon Mystery Dungeon DX with this guide. Guide includes necessary conditions for recruit, tips to maximize your chance & more!

How Do You Recruit Pokemon?

In order for you to recruit Pokemon to your ranks, certain conditions need to be met. Here are few examples of the necessary conditions you should check to maximize your chances of recruiting new Pokemon!

In order to recruit new Pokemon, you will need to already own a Rescue Camp that your new recruits can reside in. These Rescue Camps (formerly known as Friend Areas in the original version) can be bought at the Wigglytuff Camp Corner in the Pokemon Square, or are acquired through events.

Defeat the Pokemon As A Leader

In order to recruit a Pokemon, they will need to be defeated in a battle against your Team's Leader. Note that the Pokemon MUST be defeated by damage from moves (not by DoT or weather damage) and need to be directly adjacent to your Leader when defeated.

Team Must Have Less Than 8 Pokemon

Although your team mainly consists of 3 Pokemon, you can also have up to 5 more extra Pokemon, up to a maximum of 8 Pokemon with you for the trip that you meet along the way. Once you have reached this maximum capacity, you will not be able to recruit new Pokemon until the end of that dungeon.

How Do I Get Better My Chance Of Recruiting?

Level Up Your Leader

The chances of you successfully being able to recruit Pokemon depends on your Team Leader's level. Level up your Team Leader as much as you can to increase your chance to successfully recruiting new Pokemon. Consider revisiting the dungeon after progressing in the game as well!

Learn How To Level Fast at Makuhita Dojo

Equipping your leader with the Friend Bow item will give you a small boost to your chance of being able to recruit new Pokemon. If you are having trouble recruiting certain Pokemon, try using this method if you fail to catch Pokemon after leveling your Leader.

The Friend Bow can be found in the B20F of Solar Cave. You can only access this dungeon after clearing the game.