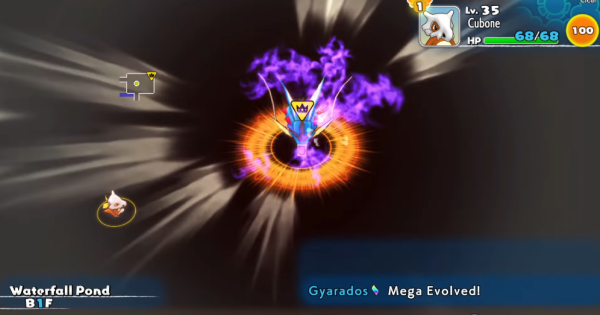 Learn all you need to know about Mega Evolution in Pokemon Mystery Dungeon DX! Featuring detailed explanation on how to Mega Evolve, Mega Evolution's effects, & more.

How To Mega Evolve Pokemon

First, you'll need to evolve a Pokemon to its final evolution phase (if it has multiple forms).

Check Out How To Evolve Pokemon!

Game Needs to Be Completed to Use

Due to it having such a powerful effect, Mega Evolution requires Pokemon and/or evolutions that are only available after beating the game (ex. Kyogre, Charizard...etc.). The pre-evolved forms can also use the Empowerment Seed but will be using an Awakened status, not the Mega Evolution.

To trigger the Mega Evolution, you need to feed the eligible Pokemon a Empowerment Seed. This boosts their stats greatly & you will receive all the positive effects of Mega Evolution.

Empowerment Seeds can sometimes be found in a dungeon (we recommend Buried Relic - it has a lot!) or be given as a reward when completing a job. These item provide an extremely powerful effect, so the supplies would naturally be limited. Choose wisely when to use them!

Aside from visual changes, Mega Evolved Pokemon will have new moves, boosted stats, and increased battle performance. This makes them an extremely formidable foe in battle.

Due to the boosted stats and performance, linked moves of your Mega Evolved Pokemon in the game will almost always do critical hits. It's best to use Mega Evolution when facing powerful foes or dungeon bosses.

When a Pokemon is Mega Evolved, it will ignore its type's weaknesses. This is great when facing off with a boss that you have a type disadvantage with.

The effect of Mega Evolution seems to be limited, but it will definitely persist for many floors. We are not sure of the exact number yet.

What Is Mega Evolution?

First introduced in Pokemon X & Y, Mega Evolution is a temporary state of evolution that only Pokemon can use.

Not All Pokemon Can Mega Evolve

List of Pokemon that can Mega Evolve will be updated once confirmed in the game!