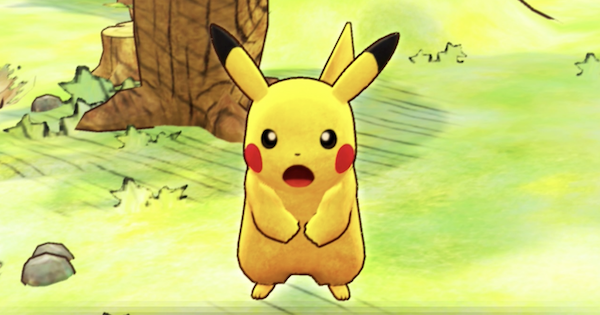 The most noticeable change of this remaster is the enhancement of the game's graphics and presentation. Sporting a picture-book art style, it breathes new life onto Pokemon Mystery Dungeon: Blue and Red Rescue Team.

Auto Mode allows players to easily explore a dungeon. By just pressing the L button, the main character, together with the whole party, will move around without the need for inputs. Auto Mode will cancel once an enemy is nearby.

New Feature: Auto-Attack With A Button

Four moves can be used when fighting an enemy in Pokemon Mystery Dungeon. However, players can approach the enemy & simply press A to attack with the strongest move available.

In Pokemon Mystery Dungeon: Rescue Team DX, players will be able to utilize the Mega Evolution and Awakenings implemented in the later franchise! With these boosted stats, you will be able to turn the tide of battle.

A new feature implemented in the game is Move Growth! Using a certain move repeatedly will allow you to power it up, making the move stronger and more efficient in battle!

New Feature: 8 Pokemon In A Party

The previous versions limit the player with up to only four Pokemon, including the main character, in a party. With the remaster, players can bring up to 8 Pokemon, with the player being able to recruit encountered Pokemon to join the party.

Replacing the IQ moves from previous implementation, a new, more simplified passive bonus called the Rare Qualities can be obtained by your Pokemons. These special passive bonuses affects the entire party, and bring various changes allowing more unique approach in your adventures.

Players that faint inside dungeons can ask for support from other players to rescue them. Players can also opt to rescue themselves by using another rescue team. If rescued, the game will continue from where the player fainted.

Main Story Is The Same

Similar to the old versions, battles in Pokemon Mystery Dungeon: Rescue Team DX are turn-based. The party stops and does battle once an enemy Pokemon is nearby.

Jobs can still be undertaken to increase your team's rank. You can take jobs through various events, by mail, or via Bulletin Boards at Pelipper Post Offices.