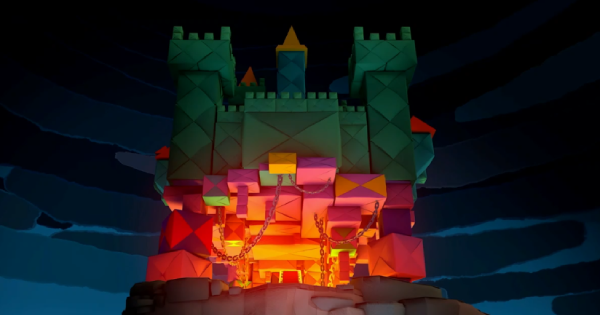 The primary story of Origami King centers around 5 main streamers and defeating King King Olly. This guide will take you from the beginning of the chapter to the end, going through each zone sequentially. If you want to find exact Toad Locations, we have separate articles for each zone where you can find them!

1. Outrun The Flood Of Goombas

There will be boulders in your path as you run away from the Goombas. Have the Bomb-Ombs come near the rocks then move away when they're about to blow.

3. Get Across the Origami Pit - Tips

Only One Side Platform Does Not Flip

To the side of the rotating bridge is a platform that you can use to not fall into the pit. There's only one of them so don't use the other ones!

Magic Circle Is With The Enemy On Your Right

8. Get To Another Origami Pit - Tips

Time Attack To When It's Out Of Staples

Stapler needs to reload its staples throughout the fight and that's when it is most vulnerable. It will open its mouth and you can attack for more damage!

>>Check Out How To Beat Stapler!

King Olly has mastered all 4 of the Vellumentals and will wield their power during the fight. You'll need to employ a different strategy to beat him.

>>Check Out How To Beat King Olly!

Since Jump Attacks take out 4 staples from Staplers, this is will make it so Stapler will reload faster. Hammer attacks do not work as well during this fight.

During the fight, Stapler will exchange it staples for red colored ones. These cause more damage so make sure to block attacks when they come.

The red were trouble, but the gold ones are dangerous! Stapler's Gold Staples does even more damage than the red ones.

Check Out The Stapler Boss Guide

Turn On & Use Special Vellumental Circle

Prioritize turning on the Special Vellumental magic circles since this is key to beating Olly in this phase. Using the circle, choose the weakness of Olly's Vellumental form to create an opportunity for attack!

After you've hit King Olly with his weakness, attack next with the 1000-Fold Arms. You need to do this in the next turn after using the Special Vellumental Circle.

Using Normal Attacks Do Not Work

Don't bother going for the same strategy you used with the Vellumentals to King Olly. For example, King Olly will brush off your attack to his tail and limbs when he's in the Earth Vellumental form.

Use The Magic Circle Behind Bowser

Bowser will need help to deal with Olly in his Origami form. Get behind him and use the 1000-Fold Arms circle to create shockwaves to help Bowser.

You can easily dodge the Origami Shurikens by jumping. Alternatively, you can also hammer them.

Olly will mess up your Magic Circle during the Last Phase. Using the rings, switch around the pieces to fix it!

Be Ready For Quick Time Events

After completing the circle, you'll need to press a series of buttons to evade Olly's attacks. Don't miss them!

Check Out The King Olly Guide

Same! I restarted it and I'm using some of these guides.

Sad that Olivia had to go... I already finished the game but I'm doing it again.