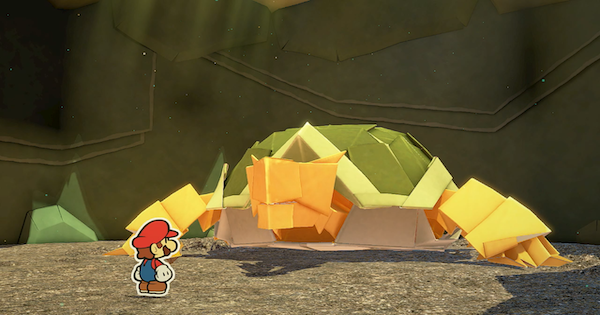 Check out this Paper Mario: The Origami King guide on how to beat Earth Vellumental! Includes tips, best ring path, how to solve puzzle, ring examples, and more!!!

Earth Vellumental is the first Vellumental boss you'll face in Origami King. This turtle-looking boss is protected by its hard shell, so you'll have to aim for its vulnerable legs.

You'll have 60 seconds to act per turn. Each turn you'll be able to move your ring 2 times, so you'll have to choose your rotations wisely. However, given that this is your first battle, you'll be getting a lot of help from Olivia.

Use The Arrow Icons

Place the arrow icons appropriately and navigate Mario near the legs or head of Earth Vellumental. Don't forget to place the Action Panel with fist at the end so that you can attack when you reach there.

Since the boss is protected by its sturdy shell, you can't damage the boss with Boots. Aim for its tail with your Hammer - once you've attacked its tails, its head, legs, and tail will retract into its shell! This is better than hitting the legs.

Press A To Guard Attacks

You can reduce your damage taken by pressing the A button just before the boss's Sandblast, Earthquake, and Rough Landing attacks.

Once all its limbs are tucked inside, head for 1000 Fold Arms Magic Circle. You can grab the boss with your extended arms, throw it up into the air and take it out! You should only need to do this once.

Ring When You Destroy Its Tail