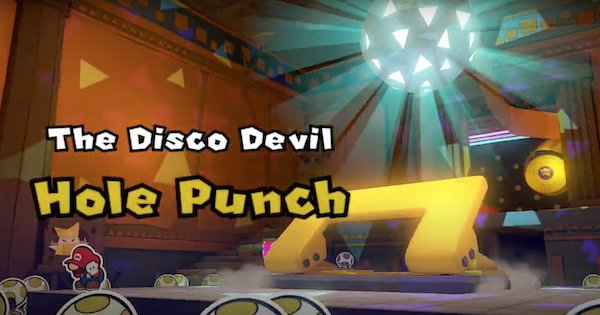 Check out this Paper Mario: The Origami King guide on how to beat Hole Punch boss! Includes tips, best ring path, how to solve puzzle, ring examples, and more!!!

Hole Punch is the third stationery boss you encounter in the game and is found in Temple of Shrooms. It loves to dance and punch holes in people's faces! This is the final boss of the Yellow Streamer section.

You'll have 60 seconds to act per turn. Each turn you'll be able to move your ring 3 times, so you'll have to choose your rotations wisely. The boss has one main phase, but it will expose its weak point eventually, so be aware of this.

Use The Hammer Only

Do not use the Boots against this boss! Bring its health down by attacking it with the hammer from behind only!

The boss will punch holes into the ground. Just like other boss tile hazards, avoid walking over this or you'll lose your turn!

Step On Your Face

At certain points of the fight, Hole Punch will happen to punch a hole ... in your face! This will reduce your maximum HP, but it's possible to get it back. Step on your face on the board when you see it to recover your HP. This is recommended, as you might get overwhelmed if your health gets too low.

When you see Hole Punch surrounded by light and charging up, aim to land on one of the Earth Vellumental seals. This is the only way to escape the attack and cause Hole Punch to be flipped on its back.

Use 1000-Fold Arms For Major Damage

While Hole Punch is flipped on its back, use the 1000-Fold Arms to attack it. Simply hit the back at first to deal a ton of damage. You can even try to rip off its protective seal, but it might shake it off if its health is not low enough!