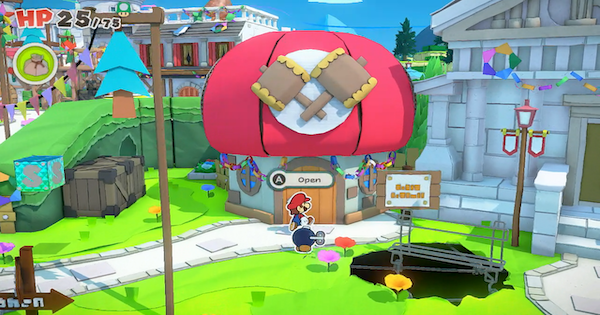 Check out this Paper Mario: The Origami King article on the Battle Lab. Find out how to clear every level of The Ringer & how to clear 16 levels in Speed Rings!!!

What Is The Battle Lab?

A Place To Hone Your Battle Skills

The Battle Lab is a unique facility in Toad Town with a ton of ways to train yourself up to improve your battle skills. If you're not acquainted with the Battle System, or you just want to have a rematch with some bosses, this is a good place to go. There are also two Trophies you can get for missions here.

Get The Puzzle Solver & Timer Extender

When you enter the Battle Lab at various points in the game, you'll get two items called the Puzzle Solver and Timer Extender. The Puzzle Solver will show you the solutions for battles! The Time Extender, if turned on, will automatically spend coins to extend your turn when you run out of time in battles! You can adjust how many coins you're willing to spend in the menu.

↑ You'll be able to toggle these features on and off from your settings page.

The first 3 features of the Battle Lab are intended to improve your proficiency with the Hammer, Boots, and Guarding. You can practice these to get the timing right and deal/block maximum damage!

What Is The Ringer?

In the Ringer, you'll have to go through 10 rounds of ring battles/puzzles and try to solve them as fast as you possibly can. There is a Trophy you can get for clearing all Ringer missions!

↑ The above numbers indicate the 12 panels.

The Reward for clearing all levels is the True Ringer Trophy!

What Is Speed Rings?

In Speed Rings, you'll have to line up toads as fast as you possibly can in 100 seconds. There is a Trophy you can get for clearing 16 Speed Ring missions!

To get the Trophy, you're going to need to solve each puzzle in approximately 5-6 seconds!

Types Of Puzzles That Appear

※ The following is based on our experiences running this mode!!!

In general, the puzzles you'll get during Speed Rings are random, but they're also based on patterns you should have seen in the Ringer mini game! Also, as you progress through the rounds, they'll get gradually more difficult.

Practice On The Ringer

The only way to get this done is to get to the point where you can solve every puzzle instinctively. If you're struggling with the first 10 levels, go back to the Ringer to practice! It's going to be a matter of muscle memory!

The Reward for clearing 16 level in one go is the Speed Ring King Trophy!

Fight Any Boss In The Game

In this mode, you'll be able to take on any of the bosses you've previously faced in Origami King! This is a great way to hone your skills and master each battle. Challenge yourself to end the battle in the fewest turns possible!

↑ You'll also be able to see a timer in the top part of your screen during these battles.

Reward For Clearing Every Fight

The reward for clearing all rounds of the Bossotronic is Collectible Treasure 15: Bowser! Make sure to get this out of the way so you can get all 120 Treasures.

on level 2 puzzle 9, the answer is incorrect