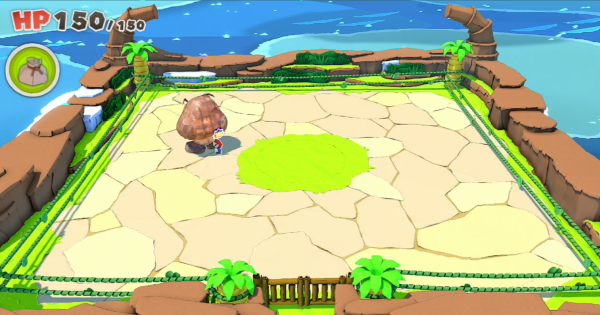 Check Out the World Map Here

What Is Scuffle Island?

Scuffle island is a melee brawl gauntlet mini-game that rewards you coins. You'll face off against 7 consecutive Paper Mache enemies in a real-time action battle. This challenge can be repeated multiple times!

How Efficient Is It?

You should be able to complete one round of this island in 10 minutes, if you are fast and know what you're doing. This means you could ostensibly be getting 1,000 coins a minute from this method.

Face Toward Boo To Stop It

Boo will stop when you face it. Make sure you put your back to Boo until it gets close to you. Then use the hammer on Boo from behind.

The only chance you have to hit Koopa Paratroopa is when it's flying toward you. Hit it with the hammer at the right time.

You need to strike the spiky chestnuts toward Spike in order to stun the boss. When Spike is stunned, hit him with your hammer.

Line Up Vertically Or Horizontally

Buzzy Beetle moves all over the place when you position yourself diagonally. Try to line up with the boss vertically or horizontally when the boss is aiming for you in order to limit its path.