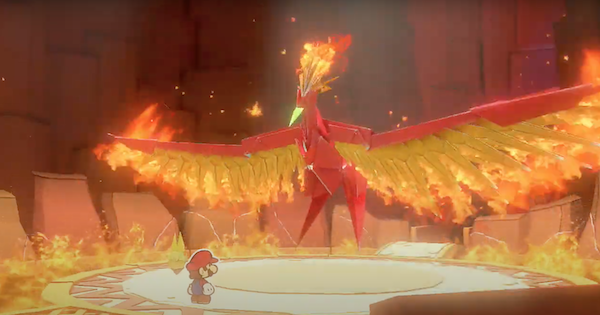 Check out this Paper Mario: The Origami King guide on how to beat the Fire Vellumental boss! Includes tips, best ring path, how to solve puzzle, ring examples, and more!!!

You'll have 80 seconds to act per turn. Each turn you'll be able to move your ring 3 times, so you'll have to choose your rotations wisely. This boss has one main phase, but if you don't bring it into a weakened/downed state, you won't be able to defeat it.

After every round, the Fire Vellumental will spread a number of its feathers all around the tiles. If you land on any of these tiles, you will receive damage so avoid them!

After all of its feathers are removed by using the Iron Boots, use the Water Vellumental to take out the Fire Vellumental's fire! This will also remove the fire of its feathers on the tiles and will allow you to use the 1000-Fold Arms against it.

It's worth emphasizing the following point: If you use the 1000 Fold arms and don't finish it off, it will fully regenerate its HP! This means you should whittle its health down with the iron boots first, THEN use the Water Vellumental Summon + 1000 Fold Arms to finish it off.