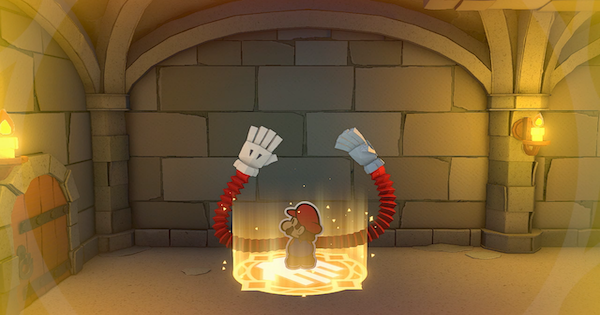 Check out this Paper Mario: The Origami King guide on 1,000-Fold Arms. Find out how to use it, gimmicks which use 1000 Fold Arms, and more!!!

In Paper Mario: The Origami King, Mario can use the new ability 1000-Fold Arms to interact with the landscape and fight enemies. Pull, peel, and hit with this extending arm to unfold all sorts of gimmicks and secrets!

While exploring the map, you'll encounter a circle sign with a hand icon. Step into this magic circle to activate the 1000 Fold Arms.

Look for interactible objects with a perforated line on them. You can peel these off by using the ZL/ZR buttons and employing the use of motion controls. Note that it's possible to turn off motion controls from the settings menu!

The arms will come in handy in dungeons as well! In the Sewer, you can grab the wheel with your extended arm and unscrew it to release water from the pipe.

You'll be able to use 1000 Fold Arms during boss battles as well. We see Mario using his extending arm to close the lid of the Colored Pencil Boss as well!

Check Out All Boss Guides Here