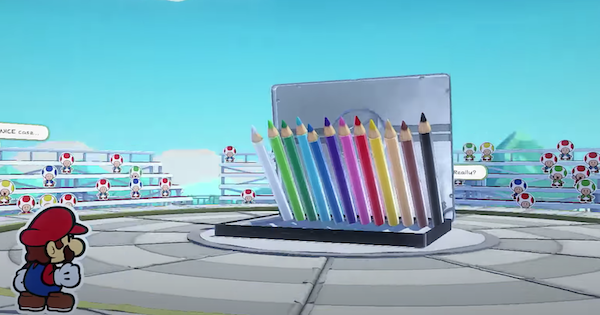 What's likely the first boss of Origami King, the Colored Pencils, actually have a real name - Jean-Pierre. He? will be the guardian of the Red Streamer, at the top of Overlook Mountain.

Colored Pencils is a two-phase fight, where you'll have 70 seconds to act per turn. Each turn you'll be able to move your ring 3 times, so you'll have to choose your rotations wisely.

Power On The Arm Switches

By stepping on the green ON button, you will activate the 1000 Fold Arms buttons on the board. This will allow you to close Colored Pencils' lid and deal large damage to him! Make sure you step on this button on your first turn!

One of the hints provided to you mid-battle tells you to avoid stepping on targeted panels! This will likely lead to you taking damage, so make sure to navigate away from them.

We were able to get a glimpse of the second phase of this boss during a live event, but we don't have any detailed information. As soon as the game releases on July 17th, we'll update this section!