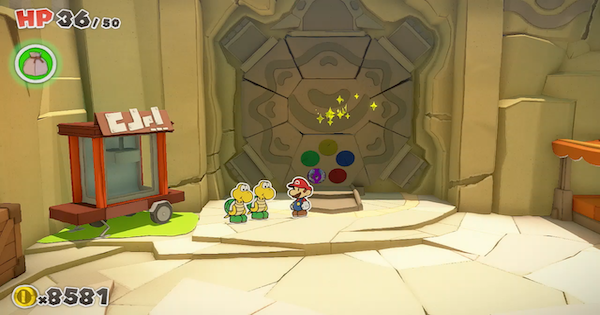 Find out how to get the 4 shell stones in Paper Mario: The Origami King! Learn the location of the shell stones and how to open the door to the Earth Vellumental Temple!!!

Required To Enter The Earth Temple

In the early part of the game, you'll be required to find 4 Shell Stones to gain access to the Earth Vellumental Temple. These will be located in the neighboring zone of Overlook Mountain!

The Green Shell Stone is obtained by haggling with Monty Mole. He is surrounded by Koopas and isn't hard to find. It's important to note here that you should stop haggling at 500 coins, because if you go lower he'll just sell it to the Koopas instead, who will ask you for 1500.

The Yellow Shell Stone is being held onto by a Dry Bones in a cliff wall. You'll have to use the 1000 Fold arms to peel a layer off the wall to see it. It's located near the save block.

The Red Shell is being passed around by a bunch of Shy Guys in the northwestern part of the map, near the Overlook Tower. Just intercept the ball to get it!