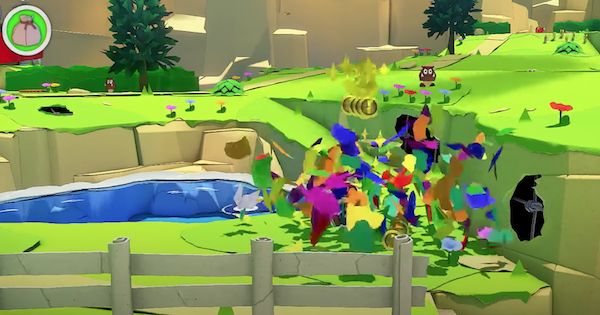 Check out this Paper Mario: The Origami King guide on Confetti. Find out the best way to get confetti, how to farm confetti, confetti bags, tips, confetti rewards, and more!!!

Check Out Our Beginner's Guide Here

The following contains speculation about the world map. Check back for updates when the game releases July 17th.

Colorful Paper To Fill Holes With

Confetti is a central item in Origami King. It is used to fill in holes in the world torn by the evil King Olly. Every area will have black holes for you to fill up using Confetti.

Check Out A List Of All Holes In The Game

The Stages Of Your Confetti Bag

Confetti is a limited resource, meaning it will run out. The bigger the hole, the more confetti you'll need to fill it up. There are 4 stages to your bag (5 if you include it being totally empty). They are marked by the above icons!

From preview gameplay we've seen, we were able to confirm that a large hole, which required 3 tosses of confetti, brought your gauge from Full to Almost Empty. It's therefore likely that each toss will drop your bag down 1 stage. We will confirm this in detail once the game releases.

The main reward for using confetti is coins. From what we've seen in previews so far, most holes will just give you coins. However, it's possible that these holes might also open up new paths to help you find other collectibles, Origami Toads or Question Blocks!

It's also possible that a Toad is hiding underneath the hole you've filled with Confetti. Check to see if anything suspicious is hiding after filling it up!

We're not sure, but since it was so heavily advertised as a major feature, it's likely that filling in every hole will be a requirement for 100% completion!

Once the game goes live on July 17th we will update this article to include more details. Stay tuned!

After defeating an enemy, their avatar in the overworld will erupt into a ball of confetti. This seems to be a large amount, so it's possible that it will fully refill your bag!

This seems to be the most conventional method of getting confetti. Simply hitting some objects in the overworld will produce confetti for you to pick up. This seems to be less than enemies, but it is likely faster to get. We are not sure about the respawn conditions of these objects yet!

Bags full of Confetti also appear to be hidden in some of the objects on the map. It is unclear if these are entirely random or fixed, but they seem to fill up your bag completely.