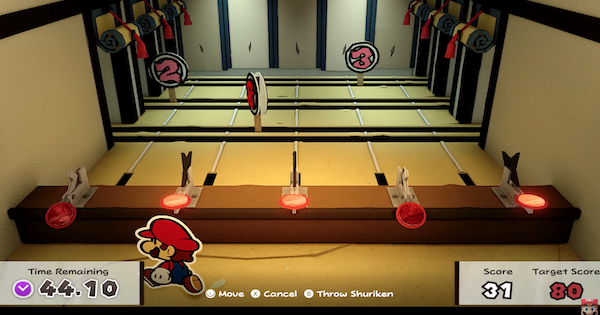 Check out this Paper Mario: The Origami King guide on Mini Games! Find out all the different mini games in Origami King, their rewards, where they're located, and more speculation!!!

The only mini game we've been able to confirm as a proper mini game is the Shuriken Toss game which was showcased in the trailer. This seems to be found in the Shogun Studios zone.

The premise of this game is that you have 5 Shuriken which you shoot at targets (both moving and stationary). Each target will have a number on it, which will award you that amount of points if you hit it. If you reach the target score for the round, you get a reward.

Each Shuriken will have a short cooldown on it, forcing you to wait some time before using it again.

The only reward we've been able to confirm is a Paper Macho Koopa Troopa, which is a Collectible Treasure. It's not known what it's for, or if there are other additional rewards to get as well.

This minigame will be available during the Green Streamer section of the game. It features 4 different puzzle categories where you'll have to solve something within a limited time. There is also a separate bonus round where you can get a Collectible Treasure. Finally, if you clear all levels of all categories, you can get a Trophy!

Another mini game available in Origami King is fishing! Fishing can be done in several places in the world. You'll sometimes have to do it to progress through the story, but there are also completionist aspects to it, such as getting a special Trophy for catching Legendary fish.

Check Out How To Get The Legendary Fish Here