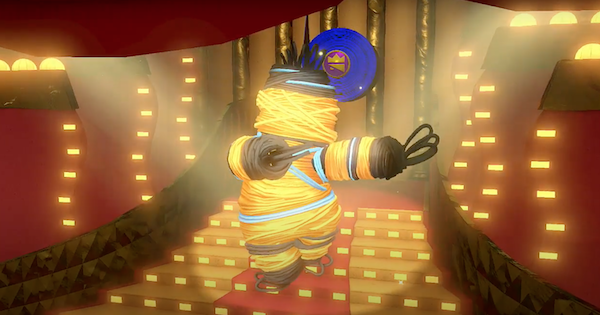 Check out this Paper Mario: The Origami King guide on how to beat Rubber Band boss! Includes tips, best ring path, how to solve puzzle, ring examples, and more!!!

Rubber Band is a second stationary boss you encounter in Big Sho' Theater. It wraps itself with rubber bands, nullified Mario's attack with its bouncy body.

Normal attacks are ineffective since it collects around rubber bands back to its body and heals its HP. Use 1000 Fold Arms to deal damages instead. The closer you are to the boss when activating 1000-Fold Arms, the more damage to the boss.

The boss uses a move called Rubber Bind which binds Mario and stuns him for 1 turn. You can escape from its bind by pressing A at the right time and guarding through its attack.

By stepping on rubber bands pointed to the center, you can move 1 title forward! Note that Mario will keep walking in the same direction - he won't stop!

When the boss' HP become close to zero, its solo form will be exposed. Use the 1000-Fold Arms to grab the boss and snap it out of the field. The boss will deal damage back to you, if you take too long here you could die, so be careful!

Can Heal Itself With Pullback Move

When you hit the boss, its rubber bands will come flying off. However, it will regain its health and rubber bands every time it uses its Pullback Move.

Will Only Use This Move During Normal Attacks

Rubber Band will only do the Pullback move if you use your regular attacks. For this fight, you really need to just use the 1000-Fold Arm attacks.