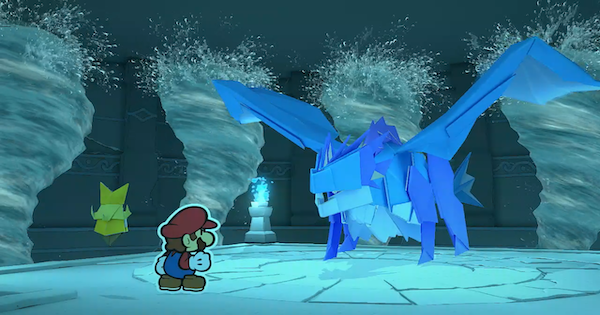 Check out this Paper Mario: The Origami King guide on how to beat Water Vellumental boss! Includes tips, best ring path, how to solve puzzle, ring examples, and more!!!

The waterspouts placed on the puzzle will push out all icons in front of them - avoid using panels located in the path of these spouts!

Use Jump Attacks To Bring It Down To The Ground

The Water Vellumental has a tendency to stay in the air, making it impossible to hit with the hammer. Bring it down to the ground first by using a jump attack on it, such as with the Shiny Boots.

Stores Water For 3 Turns, Then Unleashes It

Make sure to keep your health up during the 4th turn of the Water Vellumental because it will unleash a huge wave of water that surrounds the whole arena!

Use Vellumental Power When Boss Is Full Of Water

When Water Vellumental's belly is completely filled up with water, it will use Big Wave (and eventually Mega Wave, Giga Wave, and Ultimate Wave), all of which deal devastating damage. You can dodge these move by stepping on the green Vellumental Power magic circle and summoning a slab of rock to stand on.