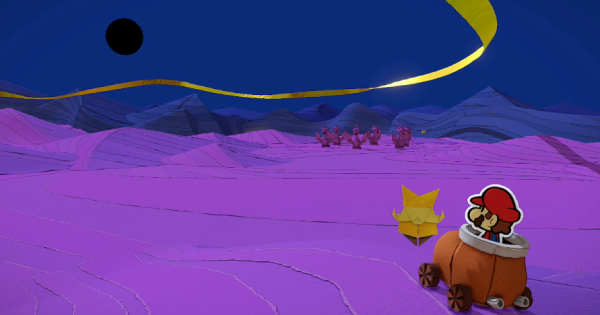 The 3rd Of 5 Streamers

The primary story of Origami King centers around 5 main streamers. Each of these constitutes 1 part of the game. This guide will take you from the beginning of the chapter to the end, going through each zone sequentially. If you want to find exact Toad Locations, we have separate articles for each zone where you can find them!

Enemies Are There Waiting to Ambush

Once you enter the control room, you'll need to fight enemies to be able to locate the Lever needed for the generator. They're your usual mooks so you shouldn't have a hard time dealing with them.

Check Out The Battle System Guide

Smash Its Tentacles With Your Hammer

The Gooper Blooper will smash away at you with its paper maché tentacles, creating a shockwave with every hit. Dodge the attacks and use your hammer to destroy its tentacles while it's still lowered on the ship! This battle will be in real time - there's no ring grid to be found here.

>>Check Out How To Beat The Gooper Blooper!

4. How To Cheer Olivia Up

Olivia becomes sad because Bobby is gone. Help her cheer up by going back to the entrance of Breezy Tunnel and talking to Bobby. After he's given you a hint on how to cheer Olivia up, go back to her and use the Goomba Mask to make her smile.

7. Help The Toad Stuck Under The Boot Car - Tips

Will Reward You With The Boot Whistle

Once you've helped out the Toad, he will resume his place behind the counter and give you the Boot Whistle. This item will allow you to get your Boot Car anywhere in the desert to ride!

Boost & Hit Enemies To Defeat Them

See an enemy on your path? Boost the Boot Car and run over them to take them out! This is instant and will give you coins and confetti!

Do At Least 1 Battle To Get The Shoe Goomba

If you speed out of this area without battling at all, you might miss the only opportunity in the game to fight the Shoe Goomba. This will be necessary to fill out the Origami Character Gallery later, so make sure to do at least one fight.

Check Out Details About The Shoe Goomba Here

The Altar of the Sun is located in Scorching Sandpaper Minor. Use the Sun Incense you got from the hotel receptionist on the Sun Altar to battle some Paper Mache Pokeys.

Recommend To Use The Boot Car

The Boot Car will let you escape and chase after the Paper Mache Pokey much easier compared to doing it by foot. If the Boot Car is blown away, you can call it back using the Boot Whistle.

>>Check Out How To Beat The Paper Mache Pokey!

11. Professor Will Dig Up Treasures

Once you've teamed up with the Professor, you can bring him to the glowing spots on the ground and he'll dig it up for you! Simply press ▼ button to dig.

Dig Up Shriveled Max Up Heart

You can find a Shriveled Max Up Heart in the southern side of Scorching Sandpaper Desert. Look for a circle of rocks and dig at the center to get it. Bring the Shriveled Heart to the lake in Whispering Woods to activate it.

Check Out All Locations Of Max Up Hearts From Here

Lose First Round, Then Play Another Round

The outcome is set to you losing so you will have to play another round of the Snifit Quiz. For the second round, choose Snickering Sniff to win the game!

Check Out The Jewels Guide Here

You will find the Square Jewel at the upper right end of the Ruins. Professor will dig it out for you when you get near it.

Back to the Desert, find two cacti next to each other and let Professor dig under them for the Triangle Gem. The Cacti are to the right of the Triangle Desert Tower.

The Diamond Jewel is on the base of the Diamond Desert Tower. You can find it on the left side of its entrance.

The Round Jewel is found at the lake in Shroom City. Line up the moon with the round part of the tower (in the lake's reflection) and then dig.

Step On Blocks That Lit Up In Order

When you step on the platform before the squares, it will show you which squares are safe to step on. Note that you have to step on the blocks that lit up in the same order.

Click to Enlarge
▲Step on the blocks in order

Bait Shy Guys To Burn Each Other

Shy Guys will attempt to light you on fire, but you can use that against them. Have then rush at you from the fire puddles they make to set themselves on fire and explode!

Can Also Hammer To Set Them On Fire

When they're holding a bucket, you can hit a Shy Guy with your hammer and they will set themselves on fire. Be careful though since if you don't hit them at the right time, you might get set on fire instead.

3. Continue Through The Shrine - Tips

Time Your Movement With Fire Releases

Don't just rush through this area because the fire does a ton of damage! Make sure to time your movements to when the fire appears and disappears. There are also some fire that you can jump up to escape from.

Rest At The Bench

You will find a Bench in the middle of this path. Rest up before going on your way!

Get The Ice Flower

There is a block at the end of one of the paths that will give you an Ice Flower. Ice Flowers is a weapon will let you throw ice balls at enemies in a straight line during a battle.

Use Iron Boots Against First

You'll need to take out the Fire Vellumental's fire first before you can use the 1000-Fold Arms on it. Use the Iron Boots until all of its feathers are gone!

>>Check Out How To Beat The Fire Vellumental!

3. Go To Where The 4 Towers Are Pointing - Tips

Location Is Where The Yellow Streamer Ends

Remember the platform where the Yellow Streamer is leading to? That's the same location that the 4 Desert Towers will be pointing at!

6. Keep Moving Through The Tempe - Tips

Stay On Guard For Booby Traps

Be careful where you step because you may just trigger a booby trap. The Temple has some sneaky Shy Guys waiting to hit you with their fan!

9. Hammer The Buttons In The Right Order - Tips

Create A Star Pattern On The Floor

Using your hammer, smack the poles to light up. You'll need to create a full star pattern to get the stairs to appear.

In the hallways where the statues fall at you, you will friend the Deep, Deep Vibes at the very end. It's close to the hole in the wall.

Enter the Pipe next to the stairs in the Dance Floor Room. There;s a chest there that will contain the Heartbeat Skipper Disc.

Exit the Dance Floor room through the stairs at the bottom. Get to the Coffin at the lower right end of the room and hit the disc on top of it.

In the room full of tombs, hit the torch next to where you find the M-A-X Power Disc with your hammer. This will open a passage. Enter it and at its end with be the Thrills At Night Disc.

14. Lead The Faceless Toads To The Dance Floor - Tips

Requires You To Revisit Areas In The Temple

With 40 Toads needed to fill the Dance Floor, you'll need to go through the previous rooms and collect as much Toads as you can.

For a guide with pictures of all Faceless Toad Locations, check out our article here!

Get close to the Coffins and it they shake, there will be a Toad inside. Push these open with the help of the Toads already with you.

Get To The Spider Web Through This Coffin

The Coffin with the moon on it has the staircase that will lead you to the Toads trapped in the web. It's the one to the right of an hourglass coffin and below another hourglass coffin.

▲A Hint as to the location of hidden staircase

Punches Holes In The Tiles

Hole Punch will create holes in the tiles. Be careful not to step on them because you won't be able to move anymore. This will also cause any item/seal to be removed if it does it to a tile.

>>Check Out How To Beat Hole Punch!

Ink Will Slow You Down

Deal enough damage to its tentacles and the Gooper Blooper will start spitting out ink! Be careful maneuvering around because the ink slows you down, making you an easier target for its tentacles.

Attack When It Is Dizzy

The Gooper Blooper's spin attack will cause it to become dizzy and unable to attack. Use this chance to rush to it and attack it with your hammer!

Once you've taken care of its tentacles, the Gooper Blooper will get on the ship. Hit the seal found on its eye first to be able to deal damage against it.

The Gooper Blooper will create new types of shockwaves that are trickier to escape. This time, since they're horizontal, just jumping won't work. You'll need to jump diagonally to successfully dodge them.

Hit With Hammer When Down

When the Paper Mache Pokey falls down, you may notice that it becomes dull in color. This means it is open for attack! Use your hammer to destroy parts of its body.

Spikes Will Damage You

Run away from the Paper Mache Pokey even when it's underground because its spikes will do 25 damage per hit! With your Boot Car, you should be able to run away from it pretty quickly.

Tornados will also appear in the area where you fight the Paper Mache Pokey. They're pretty predictable, just make sure not to get on their paths.

Will Now Roll After Dropping

The Paper Mache Pokey will not just fall down anymore after you destroy its first part. It will now also roll towards your direction!

Head Will Start To Bounce Around

With only its head left, the Paper Mache Pokey will start to bounce around in the hopes of landing on you. When it becomes dull in color after landing, take this chance to attack it. Olly's Seal is on the very top of its head!

After all of its feathers are removed by using the Iron Boots, use the Water Vellumental to take out the Fire Vellumental's fire! This will also remove the fire of its feathers on the tiles and will allow you to use the 1000-Fold Arms against it.

After every round, the Fire Vellumental will spread a number of its feathers all around the tiles. If you land on any of these tiles, you will receive damage so avoid them!

When you see Hole Punch surrounded by light and charging up, aim to get one of the Earth Vellumental seals. This is the only way to escape the attack and it will cause Hole Punch to be flipped on its back.

Use 1000-Fold Arms For Major Damage

While Hole Punch is flipped to its back, use the 1000-Fold Arms to attack it. This will be rapid attacks, dealing a ton of damage. You can even try to rip off its protective seal, but it might shake it off if its health is not low enough.