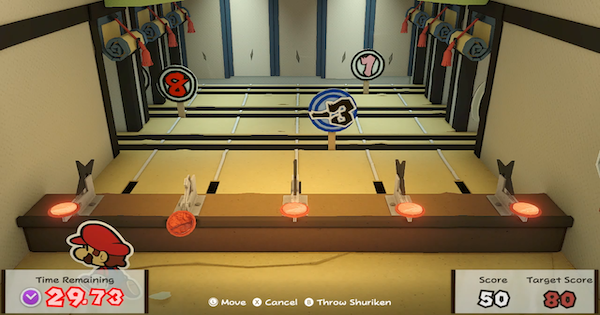 Check out this Paper Mario: The Origami King guide on the Shuriken Mini Game. Find out how to get 100 points on expert mode, treasure rewards, and tips!!!

Check Out All Other Mini Games Here

Shuriken Toss is one of the first Mini Games you can play in Origami King. It is found in the Shogun Studios zone.

Note that if you get the Royalty Pass, playing this mini-game will be free! This can be bought at a vending machine to the right of the theme park entrance. Otherwise, non-practice modes will cost you 500 and 800 coins respectively.

The premise of this game is that you have 5 Shuriken which you shoot at targets (both moving and stationary). Each target will have a number on it, which will award you that amount of points if you hit it. If you reach the target score for the round, you get a reward.

Each Shuriken will have a short cooldown on it, forcing you to wait some time before using it again.

The goal of normal mode is to reach exactly 21 points. Exceeding this will cause you to lose, so make sure to adjust your score by hitting negative (blue) targets too!

The goal of expert is to get at least 80 points. However, if you want to get the special Trophy, you'll have to get over 100 points!

There are 3 main rewards to the Shuriken Mini Game. The first is required to progress through the story of the Blue Streamer section of the game and is done on Normal Mode. The latter two are done on Expert Mode and are both Collectible Treasure!

How To Get 100 Points (Shuriken Master Trophy)

Although it goes without saying, you need to try to get every single 8 that pops up. They will disappear rather quickly, so you need to be in a good position to get them. For this reason we recommend staying in the center as much as possible. Also, don't waste shots on anything lower than 2 unless absolutely necessary.

8s In The Back Don't Disappear Quickly

8s that move in the middle and front rows will disappear relatively fast, but ones in the back will not! This means you can take your time with these - clear out any pesky targets that might be in front of it first.

If you're able to get over 100 points, you will be rewarded with the Shuriken Master Trophy. This is one of 15 special trophies that you can get. Talk to the receptionist in the Toad Town Museum to receive it!