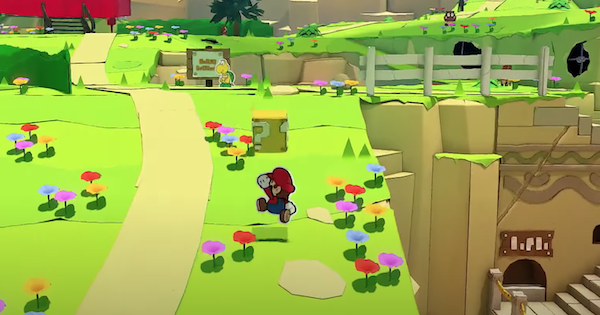 Check out this Paper Mario: The Origami King guide for hidden blocks (? block). Includes possible hidden question block locations, where they are in each zone, a list, & rewards!!!

What Are Hidden Blocks (? Blocks)?

Hit To Get Items And Coins

"?" (or Question) Blocks are a Mario franchise staple - they are blocks you jump to get coins and other items! In Paper Mario, you will find them around the different areas.

Check Out The World Map Here

You can also get weapons from Hidden Blocks. There are only specific blocks that will give you these and they are on set locations.

Required For The Secret Ending

Hitting all Hidden Blocks in every zone will be a requirement to see Origami King's Secret Ending! You will also need to collect all Toads and Confetti Holes.

Check Out How To Get The Secret Ending

You can find floating Hidden Blocks all across the different areas of the world, though no one is quite sure what's keeping those things in the air...

Found On The Ground

There are also Hidden Blocks on the ground for you to find. Instead of jumping up to them, you'll need to hit them with the hammer to get at their contents.

There Are Also Invisible Blocks

Invisible blocks are also littered around the different zones of Origami King. You can only find them by hitting them. It's easier to find them with the Hidden Block Unhider!

Although the Hidden Block Unhider doesn't exactly show you the Hidden Block, it will help you pinpoint its location. The closer you are to a given Hidden Block, the stronger its reactions will be! However, you can only unlock this tool after destroying the Yellow Streamer.

Check Out The Hidden Block Unhider